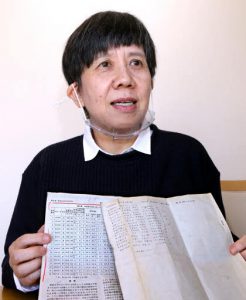 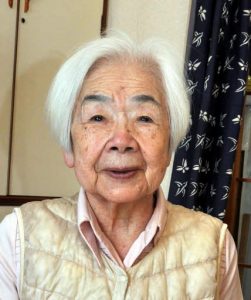 
Supporter of A-bomb microcephaly patients and families, Ms. Yamanouchi blew whistle after search for medical exam records
Notes transcribed by Mikiko Yamanouchi, a one-time employee of the Atomic Bomb Casualty Commission (ABCC), were recently discovered among materials left by Ms. Yamanouchi, who lived in Hiroshima’s Naka Ward and died in July this year at the age of 89. The notes written by her own hand include internal information held by ABCC such as the names and birthdates of 16 A-bomb microcephaly patients. The materials shed light on the existence of the victims and led to the establishment of the Mushroom Club, a group composed of people with microcephaly and their families. ABCC was a U.S. organization established during Japan’s occupation by Allied Forces and the predecessor organization of the present-day Radiation Effects Research Foundation (RERF), which is jointly operated by the governments of Japan and the United States.

Ms. Yamanouchi’s daughter Izumi Haramori, 63, ran across an envelope on which the words “Regarding microcephaly” were written. The envelope contained a copy of a paper translated into Japanese about the disorder. The paper was titled “Delayed Effects Occurring Within the First Decade After Exposure of Young Individuals to the Hiroshima Atomic Bomb” and published in 1956 by the late Dr. Robert W. Miller, who served as head of ABCC’s pediatrics department.

The paper referred to the heights and head circumferences of 16 patients who had been exposed to the atomic bombing while in their mother’s womb and suffered from the disorder. The paper referred to the patients not by their names but by the six-digit numbers used at ABCC for medical examinations. Ms. Yamanouchi, however, handwrote the participants’ names that corresponded with the numbers on the reverse side of the copy of the paper.

It appears that the copy was made in 1965. Naomasa Hirao, 57, secretary-general of the Mushroom Club, said that Ms. Yamanouchi had conveyed to him about what had happened in those days. Requested by Munetoshi Fukagawa, a tanka poet who worked to support A-bomb survivors, Ms. Yamanouchi set about looking for medical records, considered confidential documents, with clues taken from the information appearing in the published paper. She obtained information on the 16 people, which then made it into the hands of the late Toshihiko Akinobu, a reporter for the RCC Broadcasting Company, and others. The information was used to identify the patients and their families, playing a role in the club’s establishment in the same year.

Because ABCC used to explain to the patients’ parents that the disorder was caused by malnutrition during pregnancy, the families were left to their own devices and became isolated. With the formation of the club and its activities, the Japanese government in 1967 recognized a causal relationship between the disorder and the atomic bombing and began to pay out allowances. Now the Mushroom Club is operated by 15 patients as well as their families and supporters.

According to Mr. Hirao’s assumption, what might have motivated Ms. Yamanouchi to become a “whistleblower” in this case could have been feelings of guilt about the fact that she was employed at a facility founded by the country that dropped the atomic bomb and that was criticized for examining the survivors without providing treatment. “She had remarked she felt guilty for surviving the atomic bombing while everyone else had died,” he said.

At the time of the atomic bombing, Ms. Yamanouchi was a second-year student at Yamanaka High School attached to Hiroshima Women’s Higher School of Education. The first- and second-year students of the high school had been mobilized to help tear down houses to create fire lanes in the area of Zakoba-cho (now part of Naka Ward). Almost all of the approximately 360 students were killed, and the school building was completely destroyed. Ms. Yamanouchi was exposed to radiation upon entering the city of Hiroshima after the bombing.

Decrying the lack of knowledge even about who had died in the bombing, Ms. Yamanouchi started looking for the relatives in a telephone directory and calling to inquire about her former classmates. She used to apologize for being the only one that had survived the tragedy. In 1985, she and other classmates published memorial tributes to those lost in the bombing.

“She wanted to help those who are left to live in obscurity and acted in accordance with her heart throughout her life,” said her daughter Ms. Haramori. Yoshio Nagaoka, 71, president of the club, said, “Without her and her brave actions, our club would have never been formed.”