My perspectives regarding TPNW, Part 6—Miho Tanaka, 26, member of “GO! Treaty on the prohibition of nuclear weapons project,” corporate employee 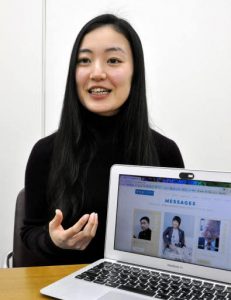 In December last year, the month before effectuation of TPNW, Ms. Tanaka and about 20 young people kicked off “GO! Treaty on the prohibition of nuclear weapons project”
Because of the efforts of A-bomb survivors and many others, the TPNW was established as a first step toward the elimination of nuclear weapons, something that had been characterized as just an ideal or a dream. We wanted to share the excitement of the moment of the TPNW’s entry into force.

However, outside of the A-bombed city, people are not fully aware of the existence of the TPNW. We thought if we could have celebrities join us, their fans and young people might pay more attention to the treaty. We gained support from such celebrities as Chizuru Azuma, an actress from Hiroshima Prefecture, and expanded the breadth of our project to expand our target audience.

Project members are young people of the same generation, including university students, a café owner, and mothers; I was responsible for designing the project’s website. As some people of our generation have shared our project activities through Instagram (the photo-sharing app) and given us encouraging messages, we have been encouraged by the response.

Ms. Tanaka grew up in Fukuoka Prefecture and came to Hiroshima for work after graduating from college. In 2017, her life changed when she learned the NGO International Campaign to Abolish Nuclear Weapons (ICAN) was awarded the Nobel Peace Prize
It is not as if I was interested in this issue in the past. I admired the fact that young people in Europe, far from the A-bombed cities, set a new course for establishment of the TPNW by meeting with representatives of governments in many nations and convincing them to support the treaty.

In November 2018, I went and heard a lecture by Setsuko Thurlow, 89, an A-bomb survivor who had temporarily returned home to Japan from Canada. When she said, “The voters should call on their local lawmakers directly to support the TPNW,” I thought we also had to act on our own just like ICAN’s young people did.

In 2019, prior to the start of “Go! Treaty on the prohibition of nuclear weapons project,” Ms. Tanaka started a group called Kakuwaka Hiroshima, which is mainly composed of young people in Hiroshima who are actively learning about nuclear policies as voters
Kakuwaka Hiroshima has approached 16 politicians, mostly Diet members elected from Hiroshima, and personally met with eight so far. Our group has asked them blunt questions about why Japan’s national government continues to turn its back on the TPNW despite Japan’s experience with the atomic bombings. Kakuwaka Hiroshima also had an opportunity to discuss with lawmakers advocating the nuclear deterrence theory. Some replied they would arrange an appointment with us but then never contacted us again.

Listening to the A-bomb survivors recount their A-bombing experiences makes real the inhumanity of nuclear weapons. The only option to ensure that nuclear weapons are never used again is their elimination. We want to communicate in an understandable way to young people the message that nuclear weapons are now illegal, continue to call on politicians to support the TPNW, and create a movement so Japan will change its stance on the TPNW and take the lead in treaty participation in its role as the A-bombed nation.

Profile
Miho Tanaka
Born in 1994. Originally from Kitakyushu, Fukuoka Prefecture. When she was a student at Seinan Gakuin University, she studied in the United States for one year. In 2017, after graduating from college, she came to Hiroshima for work. She serves as Kakuwaka Hiroshima co-chair and now lives in the city’s Nishi Ward.