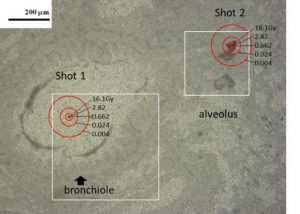 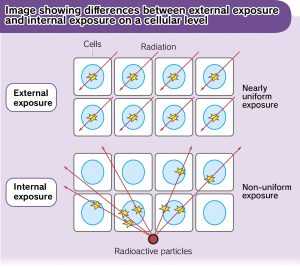 Why is it that people who entered the cities in the aftermath of the atomic bombings or who were caught in the “black rain” complain of health problems despite their not having been exposed to large amounts of A-bomb radiation generated by the explosion? For many years, despite signs pointing to the possibility of internal exposure, in which radioactive particles are absorbed internally, understanding of how radiation affects the body in this way has not made any progress. Research on a part of that mechanism has finally begun.

A black spot is visible on the micro-image of the mouse’s lung. “That’s necrotic tissue,” explained Kazuko Shichijo, assistant professor at Nagasaki University who analyzed the image. The work is part of joint research conducted by Masaharu Hoshi, professor emeritus at Hiroshima University, and other researchers in Japan, Kazakhstan, and Russia. The group published a paper in June of last year as one of the first concrete examples of cell damage caused by internal exposure to radiation.

The experiment was conducted by having mice inhale powdered radioactive manganese dioxide, followed by dissection a total of six times to examine the condition of the mouse lungs, during a period from six hours to up to eight months later. The research team confirmed that there was damaged tissue around the radioactive particles that remained in the lungs. The mice with internal exposure were found to have a tendency to experience more severe symptoms of inflammation and hemorrhage throughout the lungs for a longer time, compared to the mice with external exposure.

Manganese is present in large quantities in soil and mud walls of old houses. It is thought that the soil and mud walls contaminated by radioactivity had been blown into the air by the bomb’s blast, and radioactive materials were absorbed into people’s bodies through inhalation of dust or exposure to rain. Manganese has a half-life of about 2.6 hours. Because it stops releasing radiation in a short time, it has been difficult to find traces of exposure later. Dr. Shichijo said, “The experiment has great significance in that we were able to locate particles deposited in the lungs and confirm that the cells around the particles were damaged.”

Until now, research on health effects of radiation have been conducted by the Radiation Effects Research Foundation (RERF), located in Minami Ward, Hiroshima City, based on the radiation doses obtained from large-scale studies of people who were directly exposed to radiation. The International Commission on Radiological Protection (ICRP)’s radiation protection standards have been established on the basis of RERF’s data.

When a human is exposed to radiation, it is said that acute symptoms in the lungs appear only when a lethal dose of more than 8 gray (Gy) of radiation is present. In contrast, radiation doses of the mice in the experiments with internal exposure were calculated to be about 0.1 Gy throughout the lungs. Dr. Shichijo and members of the team believe that the cells were damaged because the exposure in narrow areas around the radioactive particles was to extremely high doses. The research team is planning to continue with analysis of the small and large intestines in the future.

Tetsuji Imanaka, a researcher at the Institute for Integrated Radiation and Nuclear Science at Kyoto University has offered his assessment of the experiment. “The current calculation model is based on the assumption that the entire organ was uniformly exposed to radiation. These findings show that the current model may not be able to capture the entirety of the effects of internal exposure.”

Research environment needs to be improved

Some people have taken a cautious approach to the findings. Manabu Fukumoto, professor emeritus at Tohoku University who specializes in radiopathology, said, “The experiment is important, but we cannot entirely exclude the possibility that the toxicity of manganese may have had something to do with it. I hope that a refined analysis can be conducted to determine the exact cause of the cellular changes.” He believes that clarification of how local internal radiation exposure might contribute to cancer development is a challenge for the future.

Dr. Shichijo said that unraveling the mystery of internal exposure is her “lifework.” The fact is, however, that it is difficult to popularize such research. Tadashi Hongyo, professor emeritus at Osaka University who studies low-dose radiation exposure, is concerned that more and more researchers are being forced to work under term-limited contracts. He urged, “Long-term observation is essential to examine radiation effects on living things, but researchers cannot fully focus on their research in an environment that calls for short-term results. Young researchers need to be supported, and genuine efforts must be made to improve the research environment at public research institutes.”

Nobuko Saeki, 78, a resident of Hiroshima’s Asakita Ward, was exposed to “black rain” when she was three years old. Her sister Yukiko, who was two years younger, died two years later. Both Nobuko and her mother suffered from cancer. However, Japan’s national government denies the link between her health problems and black rain due to a lack of “scientific basis.” Every time her claim is rejected, she thinks, “Perhaps it’s too late to do anything now.” The government of what it itself calls the “A-bombed nation” is being put to the test regarding whether it can exhibit the seriousness required to fill the “voids” about the actual damage caused by the atomic bombings not limited to direct exposure.