Thoughts from Hiroshima: “Survivors wherever they are” Brazil A-bomb survivors association disbands after 36 years 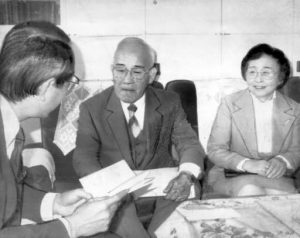 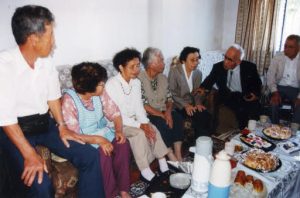 Duty of humanity to pass down A-bombing experiences and realize a world free from nuclear weapons Takashi Morita, 96, and his late wife Ayako, both of whom experienced the atomic bombing in Hiroshima and then emigrated to Brazil, established the association in 1984 in São Paulo with 25 other members.

After a local Japanese newspaper reported the launch of the association, numerous people identifying as A-bomb survivors paid visits to Mr. and Mrs. Morita. The couple met each of them, listened to their situation at the time of the bombing, and confirmed whether they would be recognized as an A-bomb survivor by Japanese law. Membership grew as a result.

After World War II, many people emigrated from Japan to the vast land of Brazil in search of a new life. Most A-bomb survivors in Brazil resided in São Paulo, but some lived in other places including Rio de Janeiro, the state of Parana, and the remote northern town of Belem. Without knowledge about the aftereffects of the atomic bomb, they were afflicted by illness and concerned about their health.

Members of the association looked for other A-bomb survivors while giving advice on the phone or in person. A collection of A-bombing experiences was also issued by the members.

It must have been very reassuring for the members to have a place where they could confide their worries. Local survivors have remarked how indebted they felt to the association.

The association worked hard to obtain assistance from the Japanese government. In the year the group was formed, Mr. and Mrs. Morita visited Japan’s Ministry of Health and Welfare, as it was known at that time, with a letter of appeal and other documents. An official there told them heartlessly, however, “You abandoned your own country. Why don’t you ask the Brazilian government for support?” Mr. Morita wrote in his memoir that “The path forward appeared to be full of difficulties. We were exhausted and returned to Brazil.”

The association also collaborated with similar groups in South Korea and the United States. When Kwak Kwi Hoon, a Korean A-bomb survivor living in Korea, filed a lawsuit against Japan for the payment of healthcare allowances based on the Atomic Bomb Survivors Relief Law, Mr. Morita and Kanji Kuramoto, the late honorary president of the Committee of A-bomb Survivors in the United States of America, appeared in court, arguing the absurdity of the government theory that A-bomb survivors were no longer survivors once they crossed the border. Mr. Morita himself filed a lawsuit with the Hiroshima District Court against Japan and Hiroshima Prefecture in March 2002. Even after that, members of the association filed lawsuits any number of times, breaking down one barrier after another lying in the way of assistance.

Kazuyuki Tamura, professor emeritus at Hiroshima University and leader of a group for support of A-bomb survivors in Brazil and the United States, explained the role the association played. “A problem considered only to be for A-bomb survivors in Korea became widely recognized as a problem for all survivors living outside of Japan.”

The survivors’ campaign calling for such assistance is inextricably linked to their wish that “no one else should have to face the same kind of suffering.” Members continued making strong efforts to communicate the actual situation involving the atomic bombings at schools and other places with the aim of realizing a “world free from nuclear weapons.” The word “hibakusha” (A-bomb survivor) has come to be recognized by many people in Brazil as a result of the association’s work.

The Treaty on the Prohibition of Nuclear Weapons came into force last month, and nuclear weapons have now been pushed to the fore as a global issue for humanity.

What will nuclear weapons bring us? What hardships did people who survived a hell on earth and left Japan undergo and what battles did they fight? Junko Watanabe, 78, who once served as a director for the association, said, “We want to leave a detailed record of what we experienced so that young people make good use of the information when they think and act.” The association had 270 members at its peak but the membership has since declined to 74. Following the organization’s disbanding, some members will voluntarily continue such work as providing consultations to and meeting with A-bomb survivors, arranging A-bombing testimonies, and preserving A-bomb-related materials.

A troubling problem for the association is the question of how to pass down their activities after survivors die and pass from the scene. Although some young people are willing to take over such work, it is not an easy task for the next generation—they were brought up in Brazil and face language barriers. A bigger challenge is how to pass down memories of the atomic bombings in foreign countries, where few survivors live.

Humanity has the responsibility to keep the survivors’ history of hardships in mind and lead to a future free from nuclear weapons wherever on earth we are.