Accounts of 50 local Fukushima residents 10 years on, Part 1: Effects of exposure to radiation 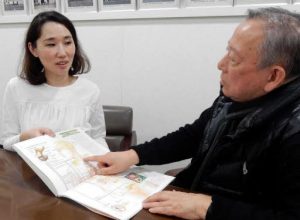 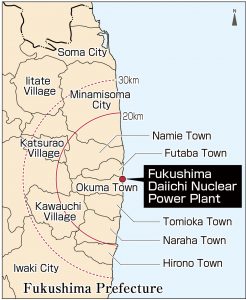 The eastern area of Fukushima Prefecture has been long known as the “Hamadori” district. In 2011, the accident at the Fukushima No.1 (Daiichi) nuclear power plant brought radioactive fallout over the entire district, forcing many residents to evacuate. At that time, the Chugoku Shimbun ran a series of feature articles titled “Fukushima and Hiroshima” for a period of one year from the perspective of the A-bombed city. One of those serialized feature articles, titled “Accounts of 50 local residents,” tracked the lives of the residents of Hamadori with their cooperation. In conjunction with the 10th anniversary of the nuclear accident, the Chugoku Shimbun visited Fukushima and once again interviewed residents there.

Tomoko Shineha, 36, has an only daughter, now 12, who is set to enter junior high school this spring. Ms. Shineha was shocked three years ago when an ultrasound examination uncovered three bag-shaped cysts in her daughter’s neck.

The family lived in Minamisoma City, Fukushima Prefecture, located 22 kilometers from the Fukushima Daiichi nuclear power plant to the north, for ten days after the accident until they voluntarily evacuated to the Soma City, located even further north in the prefecture. They now live in Sendai City, but Tomoko continues to be haunted by the doubt that her daughter’s condition might have been the result of exposure to radiation.

200 children are diagnosed as having cancer

The thyroid is a gland under the Adam’s apple. Cancer could result if radioactive iodine released by the accident were to concentrate in the thyroid. The younger one is of age, the greater one’s risk is believed to be of developing thyroid cancer.

In fiscal 2011, the Fukushima Prefecture government initiated ultrasound examinations for all 380,000 children in the prefecture who were 18 or younger at the time of the accident. Until now, about 250 children were suspected of having cancer. Of that number, 200 were confirmed to have thyroid cancer through follow-up diagnosis.

Implications of the nuclear power plant accident cross the minds of such children and their families. However, a prefectural review committee for the Fukushima Health Management Survey has adopted the stance that children’s health is unlikely to have been affected by radiation exposure. The committee has attributed the reason for its position to the fact that exposure doses of radiation from the accident in Fukushima were lower than those experienced in the 1986 Chernobyl nuclear power plant accident in the former Soviet Union.

According to Ms. Shineha, the size of her daughter’s cysts was not large enough to have her undergo detailed exams immediately. “My daughter doesn’t seem to care about it at all, but I can’t help worrying about her as her mother,” said Ms. Shineha. Someone she can confide in is Ryuzaburo Shineha, 68, her husband. Mr. Shineha works as director at the Soma Central Hospital.

Mr. Shineha is a digestive surgeon. When he worked at Tohoku University Hospital in Sendai City in 2005, he visited the Marshall Islands’ Bikini Atoll in the Pacific Ocean, which was once a U.S. hydrogen bomb test site, engaging in health surveys of local islanders.

What he heard during his visit there was fear of the “ashes of death” (radioactive fallout) from the testing, to which the Daigo Fukuryu Maru (The Lucky Dragon No. 5), a Japanese tuna fishing boat, was also exposed. Similar to those tests, in Fukushima, the fallout fell over a vast area. As a result, invisible and odorless radioactive substances destroyed local citizen’s lives. When the accident took place, he was the director of a hospital in Minamisoma City. Due to chaos that ensued after the shelter-in-place order set down by the national government, the hospital had to be shut down temporarily.

Although he has expressed anger at the Tokyo Electric Power Company (TEPCO), the operator of the nuclear power plant, and concern for his daughter’s situation, he responded to his wife’s question from his perspective as a medical scientist. “No health damage will likely be caused by the accident. We don’t need to worry about our daughter, either.” Like the view of the prefectural review committee, he focuses on the low amounts of radiation released in the accident.

March 11 should be a chance to talk to each other

Despite the words of her most trusted confident, her husband, Ms. Shineha cannot relax. “I have come to know the suffering of A-bomb survivors in Hiroshima and Nagasaki as a result of the Fukushima accident.” In addition to acute damage such as loss of hair, exposure to radiation precipitates long-term health damage in the form of leukemia and solid cancers, which develop several years to decades later. Considering the effects caused to health by radiation, she simply cannot let go of her anxiety.

With her daughter at a sensitive age, Ms. Shineha said, “I want to have a family talk about her health even if she doesn’t want to.” She believes that March 11, the date of the 10th anniversary of the accident at the Fukushima Daiichi nuclear power plant, will provide her with that opportunity.