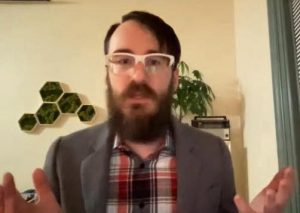 Stephen Herzog, 34, a research fellow with the Project on Managing the Atom at Harvard University and other researchers have conducted a survey of public opinion in Japan regarding the Treaty on the Prohibition of Nuclear Weapons (TPNW), publishing a related paper in Nagasaki University’s Journal for Peace and Nuclear Disarmament. The survey results showed that about 75 percent of respondents felt that “Japan should join the TPNW,” revealing a divide in opinion between the Japanese national government, which opposes the treaty, and the Japanese public. The Chugoku Shimbun recently spoke with Mr. Herzog about the survey’s significance.

What was your aim in conducting the joint research “Japanese Public Opinion, Political Persuasion, and the Treaty on the Prohibition of Nuclear Weapons” with Jonathon Baron and Rebecca Davis Gibbons?
Polls conducted by Kyodo News, NHK (Japan Broadcasting Corporation), and other media showed that many Japanese favor the TPNW. At the same time, there exist some critical views regarding the treaty, such as that it will undermine the U.S. nuclear umbrella or compromise the Nuclear Non-Proliferation Treaty (NPT). I therefore became interested in how the Japanese public feels about it.

How did you conduct the survey and what were the results?
We worked with a research firm and randomly selected 1,333 individuals, dividing them into five groups without any bias in terms of political affiliation, educational background, or income. Four of the five groups were asked to read arguments opposing the TPNW before providing their opinion. As an example, one major problem with the TPNW is that Japan would no longer be protected from threats by China and North Korea if the U.S. were to join the treaty and give up its nuclear weapons.

Surprisingly, most respondents, about 75 percent of the total, said Japan should join the treaty even after considering the negative scenario, with only 17.7 percent opposing it. There was no apparent difference in response by political affiliation or income. The results show that the Japanese public fundamentally supports the TPNW.

Can we say that the Japanese public fully and actively supports the TPNW?
The testimonies of the A-bomb survivors and consistent efforts by the Japanese peace movement have had effects in Japan and around the world. Their mission to create a world free of nuclear weapons has contributed to the remarkable depth of support among the Japanese public for the TPNW. When we conducted a survey in the United States using the same methodology, the percentage of those favoring the treaty was substantially lower in the groups that had had access to information critical of the treaty.

In our survey of public opinion in Japan, only six to seven percent declined to respond. Considering that 30 to 35 percent of people usually refuse to respond in other surveys, it is clear that the Japanese public has a high interest in nuclear issues compared with other countries.

Stephen Herzog
Graduated from Knox College. Worked for the U.S. Department of Energy after earning an M.A. and M. Phil. in Political Science from Yale University and an M.A. in Security Studies from Georgetown University. Mr. Herzog is currently a resident of the U.S. state of Massachusetts.