Survivors’ Stories: Ruriko Yoshida, 94, California—Decided to share her Hiroshima A-bomb experience with people in the U.S. 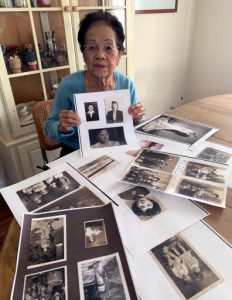 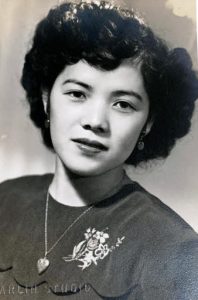 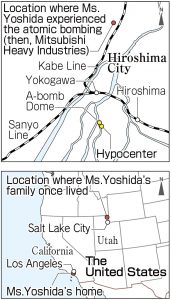 
Remembering co-workers who died painful deaths, her nostalgia for her hometown is mixed with sorrow
“I have sorrowful memories of war and the atomic bombing in Hiroshima, but it is still my precious hometown.” Ruriko Yoshida (née Mimura), 94, was born in the United States. She came to Hiroshima before the start of World War II in the Pacific and ultimately experienced the atomic bombing. After the war, she returned to the United States, where she lives a quiet life in a suburb of Los Angeles.

Mainly from the late 1800s to the early 1900s, a large number of Japanese nationals emigrated to the United States to work on farms or in retail shops. Hiroshima Prefecture is particularly known for encouraging many people to move overseas. Ms. Yoshida’s parents were engaged in the growing of produce such as sugar beets in the U.S. state of Utah.

“The climate was harsh in winter there. My father worked harder than anybody else to send money to people back in Hiroshima.” Around that time in the United States, the Immigration Act of 1924 was enacted, and by 1926, when Ms. Yoshida was born, sentiment against Japanese immigration had grown harsh.

In 1935, eight-year-old Ms. Yoshida and her two sisters went to live with their grandmother in Midorii Village (now part of Asaminami Ward, Hiroshima City) to be educated in the Japanese system. After she graduated from Hiroshima Prefectural Kabe Women’s High School (now Kabe High School), she was mobilized to work for Mitsubishi Heavy Industries in the area of Gion-cho (now part of Asaminami Ward) as a women’s volunteer corps member, working in the payroll section.

On August 6, 1945, she was at her desk in the factory opening a ledger with an abacus in hand when a bright light flashed. She heard a roaring sound followed by a tremendous force from the bomb’s blast. Window glass was shattered and strewn about in pieces. She heard her co-workers screaming. People by the window were hit by shards of flying glass all over their bodies. She saw blood spurting from the body of the person next to her. Ms. Yoshida, then 18, was able to escape injury by quickly hiding her head under the desk. The factory was located about 6.5 kilometers from the hypocenter.

Before long, workers who had been in the central part of the city working to demolish buildings to create fire lanes returned. Their clothes were burned to tatters, their faces swollen twice their original size. They were carried to a dormitory and an assembly hall on the grounds. The best Ms. Yoshida could do was to apply cooking oil to their wounds with gauze or feed them rice porridge with umeboshi (pickled plum). The hot and humid room soon filled with a terrible stench.

She removed maggots with chopsticks from infested wounds. Factory workers she knew were dying painful deaths one by one. Wooden boxes of ashes continued to pile up. Long afterward, she continued to suffer from the memory of such dreadful sights.

Two years after the war ended, Ms. Yoshida crossed the Pacific again to live with her parents in the United States. She worked hard helping with her father’s farm work, trying to forget the horrible memory. The next year, her family moved to California. When she was 22 years old, she married Hideo from Hiroshima (who died in 2014 at the age of 90).

In 1978, Ms. Yoshida stepped on Hiroshima soil again for the first time in 31 years to see relatives. She visited the Hiroshima Peace Memorial Museum but could not look directly at the artifacts or the photographs of severely burned victims. Encouraged by a former classmate at Kabe Women’s High School, she revisited Hiroshima 20 years ago to receive an Atomic Bomb Survivor’s Certificate. She looked at the lights of the city from the hotel where she was staying with tears in her eyes. “I remembered the city burnt to the ground, and indescribable emotions welled up,” she said. She has not visited Hiroshima since 2003.

While living in the country that used the atomic bombs, she never shared her experience with her two daughters or friends because she did “not want them to feel gloomy.” However, she made a decision to “speak about it” and testified for the first time via an online videoconferencing system. Her second daughter Arleen, 64, listened to her story by her side. Ms. Yoshida now has a new desire. “I want to tell my grandchildren about my experience someday.”