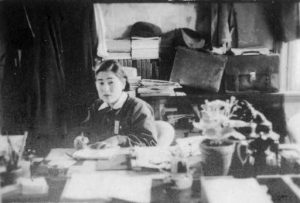 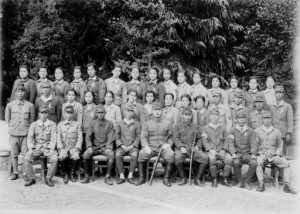 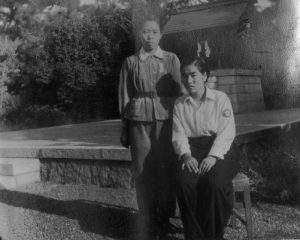 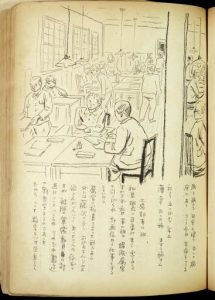 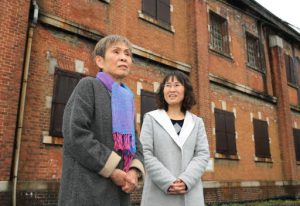 
One of the photos was taken of the general affairs department
Three rare photographs taken at the former Army Clothing Depot, the largest set of A-bombed buildings in Hiroshima, located in Minami Ward, have been discovered in a photo album of a former clerical worker kept by her family. The photos, taken about a year before the atomic bomb was dropped, show daily life of Hiroshima as a military city at a time when the country had increasingly been brought to a war footing.

A small black-and-white photograph, capturing the woman working at a desk with documents, a flower pot, and other items, was taken in September 1944 in the general affairs department of the Army Clothing Depot. It appears as if she was looking up at a co-worker who had suddenly said something to her. The department is believed to have been located on the first floor of the two-story wooden building near the main gate. Sunshine coming through the window is also visible in the photograph.

The woman’s name was Tsuneko Koyanagi (née Nakagawa), who died in 2004 at the age of 82. Ms. Koyanagi was a city worker but resigned in July 1942 when she married. In November of the same year, she started to work for the labor management section of the general affairs department at the Army Clothing Depot. “She always told me that women should continue to work. I think she felt compelled to do something after her husband went to the front,” said her eldest daughter, Midori Morimoto, 73, of Hiroshima’s Nishi Ward.

Shinobu Kikuraku, a staff member at the Hiroshima Peace Memorial Museum and also the secretary of a group of citizens that calls for preservation of the former Army Clothing Depot and works to collect materials and testimonies related to the facility, said, “There are only a few photos that have been confirmed that capture ordinary scenes at the workplace. I’ve never before seen a photo of the depot’s general affairs department.”

Anti-war artist Goro Shikoku (1924–2014) worked at the depot for five years starting at the age of 14. In his memoir titled Waga Seishun-no Kiroku (A Record of My Youth) is a sketch that appears to be the depot’s general affairs department of about the same time.

The depot was constructed around 1913, with 13 buildings on 17 hectares of land along the Ujina train line. The building in which the general affairs department was located is believed to have been built at about the same time in a corner adjacent to the other buildings.

Many school students were mobilized to work at the depot, where items including military uniforms, shoes, fur coats, and mosquito nets were manufactured. At about 2.7 kilometers from the hypocenter, the buildings were exposed to the A-bomb blast, but four brick buildings did not collapse and served as a temporary relief station where severely wounded victims were treated. The area turned into a scene from hell.

Ms. Koyanagi worked as a clerk in the general affairs department until late July 1945. She experienced the atomic bombing at her home in the area of Shinonome-cho (now part of Hiroshima’s Minami Ward). She started helping at the city’s family registration section in October, being pressed into work confirming the fate of citizens and filling out death registrations. She hardly spoke about the depot to her family before her death. Whenever she was asked about the chaos following the bombing, she was choked with emotion and remained silent.

How to preserve and make use of the four remaining brick warehouses is currently a topic of debate. Kei Nogami, 49, Ms. Koyanagi’s granddaughter who lives in Nishi Ward, stressed, “My grandmother could live through the postwar period thanks to the A-bombed buildings, which encouraged her to live and make efforts toward reconstruction.” She plans to donate the photographic data to the citizens group calling for preservation and work to share her grandmother’s experience as widely as possible.