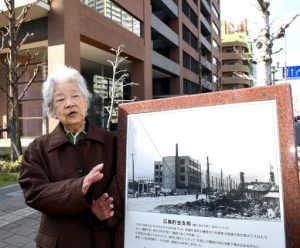 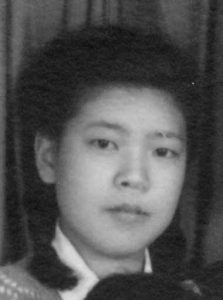 
Shattered pieces of glass in hair—Face, body covered in blood
The branch building of the Hiroshima Chokin Bank, located in the area of Senda-machi (now part of Hiroshima’s Naka Ward), was 1.6 kilometers from the hypocenter. The four-story ferroconcrete building had a unique design with expansive windows. The blast force from the atomic bomb shattered window panes, spattering blood from the wounded over a wide area. Hisae Okabe (née Ono), 95, to this day distinctly remembers the horrific sights she witnessed when she was 20.

In March 1940, Ms. Okabe completed an advanced course of the elementary school affiliated with Hiroshima Higher Normal School (now the elementary school affiliated with Hiroshima University) and began working at the branch building of the Hiroshima Chokin Bank. The office where she worked was on the second floor. She practiced using an abacus for ten minutes every morning, and her job was to record received and paid monies in a ledger. August 6, 1945, was the day when people in managerial positions were to be transferred. When she arrived at work before 8:00 a.m., the atmosphere was somewhat restless. With some of her coworkers, she killed a bit of time in a room where bookkeeping documents were stored.

The moment she started to return to her desk, she was bathed in an intense flash of light. She quickly covered her ears and laid herself flat on the floor, something she had been trained to do to keep herself safe. She arose to find that the left arm of the woman in front of her had nearly been torn off, probably from flying glass. The woman repeated to Ms. Okabe, “Just take my arm off, it’s so heavy.” But Ms. Okabe was too scared.

Everybody frantically rushed to the exit. As she ran for her life, she saw a subsection chief lying on his back with a shard of glass in his throat. On the first floor, a cleaning woman she knew stood in shock while holding her daughter, who seemed about three years of age. Ms. Okabe could see that the girl’s intestines had spilled from her body.

According to The Records of the Hiroshima A-bomb War Disaster, 871 people worked in the building at the time, with 87 staff and mobilized students dying and 488 being wounded. Many wooden houses in the Senda-machi area collapsed, and Ms. Okabe herself saw a house across the street wobble and give way.

Ms. Okabe decided to return to her home in the area of Danbara-suehirocho (now part of Minami Ward) by way of the city center. But a person who appeared to be a police officer stopped her, saying the words, “That area is on fire.” She thus had to cross Miyuki Bridge. She saw people wandering around with their lips and skin all over their bodies peeled off. One was nearly naked and wearing only a belt, with the black parts of the person’s clothes burned off.

Ms. Okabe finally arrived home in the early afternoon. When she washed her hair in the bathroom sink, pieces of glass fell from her hair, and her face and body were covered in blood. Because of radiation from the bomb, she later suffered hair loss but gradually regained her health.

Mr. Okabe married Kihachiro Okabe when she was 22. She gave birth to her son Kikuo, now 72, in 1948, and her daughter Setsuko, now 70, in 1951. Kihachiro died at the age of 83 in 2002. At the time they married, there was strong prejudice against women who had experienced the atomic bombing. Ms. Okabe said, “My mother-in-law also experienced the atomic bombing, so I think that’s why she accepted me.” Ms. Okabe and her mother-in-law ran a restaurant near Shukkeien Garden in the area of Kaminobori-cho in Hiroshima’s Naka Ward. Her husband became a wholesaler in the beauty salon industry, and Ms. Okabe helped and managed the family’s finances.

Ms. Okabe’s father, Wakanori Ono, was 47 at the time of the atomic bombing. He was in present-day Hatsukaichi at the time and did not directly experience the bombing. But he returned to Hiroshima immediately and searched for his neighbors. He died from lung cancer 14 years later. Ms. Okabe said, “I think his cancer was caused by residual radiation.”

Ms. Okabe had been scheduled to work the night shift the day before the atomic bombing. Someone by the name of Kishina, however, had asked her a few days before to trade night shifts with her. Kishina died on her way home, but Ms. Okabe survived because she had been in the ledger storage space with its small windows. This slight difference in timing was the difference between life and death.

After the war, the building was used as the Postal Savings Bureau in Hiroshima, before being demolished in 1989. All the while forcing back her memories of the atomic bombing, she felt strongly that “atomic weapons must cease to exist.” Now, her son is helping with peace studies at Noboricho Elementary School in their community. She has left her wishes up to him.