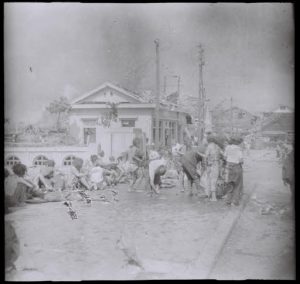 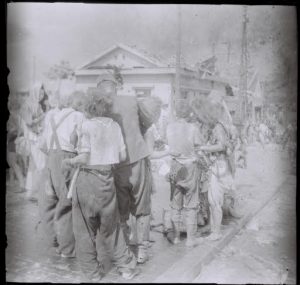 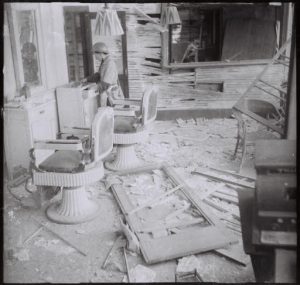 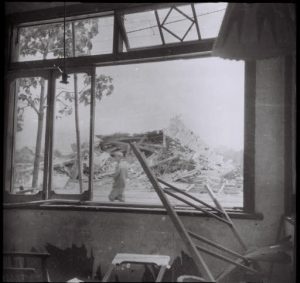 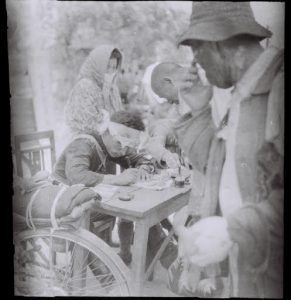 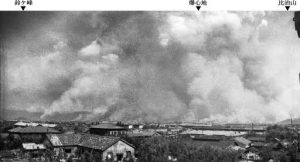 On March 26, five photographic negatives of August 6, 1945, taken by Yoshito Matsushige (1913–2005), a former photojournalist for the Chugoku Shimbun, were designated as Hiroshima City important tangible cultural properties. They are the only negatives in existence that capture the humanitarian disaster of the atomic bombing on that day. Mr. Matsushige’s photographs represent Hiroshima’s tragedy and convey a message to people in and outside Japan about what would happen if nuclear weapons were to ever be used again. All of us must think about how the photos can be fully utilized for the sake of the future. In this series of articles, the five photos developed from Mr. Matsushige’s negatives, which he provided to the Chugoku Shimbun when he was still alive, are published once again. We look into his actions and thoughts as a photographer in the aftermath of the atomic bombing and consider the significance of his photos as a record of the bombing and as “witnesses to history.”


Caught between mission as photojournalist and conflict as individual, worked hard to preserve photos
With the first photo: “What a terrible thing they did”
With the second: Tears

On that morning of August 6, Mr. Matsushige had just finished his standby duties at the Chugoku Military District Headquarters, located on the grounds of Hiroshima Castle, and was returning to his home in Midori-machi in Hiroshima (now part of Nishimidori-machi, Minami Ward). He worked as a photojournalist for the Chugoku Shimbun as well as a member of the press corps at the military headquarters. On his way to that work after eating breakfast at home, he realized he needed to pay a visit to the bathroom and was returning back to his house, where he experienced the atomic bombing.

Later, when sometimes bluntly asked how he was able to take photos on the day of the bombing, he would answer honestly and calmly until the end of his life that, “I was able to take the photos on that day because I think I was destined to survive.” If, as scheduled, he had headed to his office, about 900 meters from the hypocenter, he would never have survived.

His home escaped destruction in the bombing. At the time, when he reached to his waist for his favorite camera the “Mamiya 6,” which he had slung around his leather belt, he found it was also fine. He crossed the Miyuki Bridge, located close by to the northwest of his home, and approached the sports fields of the Hiroshima University of Literature and Science (now part of Hirano-machi, Naka Ward). He retreated to the bridge, however, when he witnessed the ferocity of the flames.

He saw a crowd of people with burned hair and skin at Miyuki Bridge. He wrote about that experience soon after the end of the war.

He himself was safe

He wrote, “I took one photo at first, thinking to myself, ‘What a terrible thing they did.’ When I pressed the shutter for the second shot, my tears obscured the view from the viewfinder.” After he found that the flames had waned and entered the downtown area, he saw many victims, some of whom were crushed under electric utility poles or appeared to have died holding a hand-strap in a streetcar whose frame was all that remained. He aimed his camera at the horrific scenes but later revealed he had been emotionally unable to press the shutter.

The above description was an excerpt from an account he wrote for an anthology of photographs titled The First Atomic Bomb Photographic Record of Hiroshima. The book, published in 1952, soon after the end of the occupation by the U.S.-led military, carried the first and second of his photos taken on Miyuki Bridge, as well as the fifth and final shot he had taken on August 6.

In front of these unimaginable scenes, he snapped the photos out of a sense of mission as a photojournalist. At the same time, however, because he himself was safe amidst the calamity, the inner conflict he felt halted him from taking more photos that day. He recorded the five photographic negatives from the viewpoint of someone who experienced the atomic bombing firsthand.

Film was washed with river water

Mr. Matsushige’s photographic film (six centimeters by six centimeters) was developed at a makeshift plant in the area of Nukushina (Higashi Ward) that the Chugoku Shimbun had established after its office had been burned to the ground. The film was processed about two weeks after it was shot. The company tried to publish the newspaper by itself as quickly as possible, but it lacked the proper equipment. The developed film was washed with river water and hung on the branch of a tree to dry, according to testimony collected in the fifth volume of The Record of the Hiroshima A-bomb War Disaster, published by the Hiroshima City government in 1971.

The photos recording the horrific circumstances on the day of the atomic bombing have been introduced in Japan and overseas since the end of the Allied occupation of Japan. After Mr. Matsushige retired in 1969, he recounted his A-bombing experiences in the United States, the former Soviet Union, and China. Because his photos gained renown, one former military man filed a lawsuit against him for copyright violation. In 1998, when his victory in the lawsuit in the first and second trials was upheld by Japan’s Supreme Court, he passed on the negatives to the Chugoku Shimbun. To avoid damage from chemical reactions, he asked the company to preserve and utilize the photographic negatives.

Starting early on, he called for preservation of the negatives of A-bomb-related photos, initiating a campaign with Shigeo Hayashi, a photographer based in Tokyo who died at the age of 84 in 2002 and had entered Hiroshima with a national government’s special committee investigating the extent of damage from the atomic bombing. In 1978, he formed a group called the Association of Photographers of the Atomic Bomb Destruction of Hiroshima and donated 285 photos taken by 20 photographers including himself to the Hiroshima Peace Memorial Museum. Now, 15 negatives taken on the day of the atomic bombing remain in total, including new negatives donated since the year 2000.

As he understood well the significance and value of photos featuring the actual circumstances of the atomic bombing, he argued, “Even the five photos I took and the several thousand photos of the atomic bombing itself are not enough to fully convey the actual terror of the bombing.” He expressed his feelings thusly in an address he made at the Independent Commission on Disarmament and Security Issues in 1981.

What should we feel, intuit, or think from the figures of the silent witnesses captured in his photos? The A-bomb photos are a record highlighting not only the past but also the present and future.


Photos introduced in Japan and overseas as invaluable “witnesses”
Only a few A-bombing photographs were taken on the ground in Hiroshima on August 6, 1945, when the city was thrown into unprecedented chaos. In 2007, the Chugoku Shimbun investigated such photos among materials stored at the Peace Memorial Museum, in the city’s Naka Ward, resulting in confirmation of 35 photos, including those whose negatives were lost.

Of that total, 25 photos feature the mushroom cloud generated by the atomic bombing. Four photos show the downtown area in flames. One photo is of a truck carrying victims toward the suburbs away from the city center. Since only the five photos taken by Mr. Matsushige record the disastrous situation of citizens under the atomic cloud, they are considered valuable materials that convey the tragedy to people in the present day.

The photo “Tragedy at Miyuki Bridge” was published in the newspaper for the first time on July 6, 1946, in the Evening Edition Hiroshima, a newspaper published by the Chugoku Shimbun at a separate company. It was not the Chugoku Shimbun’s regular publication. The subtitle “U.S. magazine publishes photos all around the world” also appeared, but the photos actually were published in LIFE, a global photographic magazine, in September 1952, after the U.S.-led occupation had ended. The heading was thought to have been used to evade press censorship put in place by the occupation forces.

Since the April 2019 opening of its main building after renovations were completed, the Peace Memorial Museum has exhibited panels of Mr. Matsushige’s two photos taken at Miyuki Bridge (each measuring two-meters by two-meters) in a space more expansive than before. A museum official was quoted as saying, “We want visitors to pause and view the images carefully.” Next to those panels is another photo panel of the downtown area engulfed in flames. While emphasizing the widespread damage in Hiroshima, the layout of panels highlights the indiscriminate victimization of citizens.

The city governments of Hiroshima and Nagasaki have always included Mr. Matsushige’s photos at A-bomb exhibits they have held overseas since 1995. In 2020, his photos were displayed on the Battleship Missouri Memorial located at Pearl Harbor in Honolulu, Hawaii.

Images developed from the five negatives taken by Mr. Matsushige on August 6, 1945, are shown here without trimming. His negatives are now in the possession of the Chugoku Shimbun. Scratches on the photographic film have been left unretouched. Captions for the photos were created by cross-checking with relevant documents and testimonies based on the anthology of photographs The Moment of Hiroshima’s Destruction, edited and published in 1981 by the Association of Photographers of the Atomic Bomb Destruction of Hiroshima, for which Mr. Matsushige served as chair.