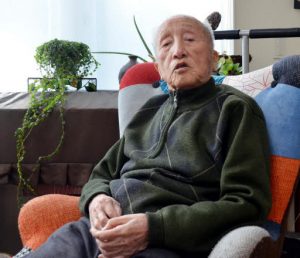 
No detailed study was undertaken regarding radiation effects in those who entered Hiroshima soon after atomic bombing
ABCC once denied effects of residual radiation
In 1947, the United States, the nation that dropped the atomic bombs, established the Atomic Bomb Casualty Commission (ABCC) in occupied Hiroshima to investigate effects of radiation on human health. ABCC’s large-scale studies, used to track cancer and other disease increases among survivors depending on radiation dose, have been taken over by its successor organization the Radiation Effects Research Foundation (RERF), located in Hiroshima’s Minami Ward. Those studies form the foundation for radiation protection efforts around the world. Around 1952 or 1953, ABCC made an effort to examine the health status of those who had entered Hiroshima’s city limits in the aftermath of the atomic bombing.

Right after the bombing on August 6, 1945, many people headed from the surrounding suburbs of the city to the center of Hiroshima to participate in rescue operations and find missing people. Those entrants into the city were not exposed to huge amounts of radiation like those present at the moment of the atomic bombing. “But rumors were circulating that they had symptoms similar to people who were directly exposed to the A-bomb radiation. We thus thought we should also investigate that group.” Hideya Tamagaki, 98, physician and resident of Saeki Ward, who was engaged in the study at ABCC, spoke about the background behind the start of the study.

The United States’ official stance was one of denying any effects of residual radiation on human health, based on the results of radiation measurements taken in Hiroshima just after the war. However, when ABCC requested information from local governments, fire departments, and physicians in Hiroshima Prefecture, more than 300 cases of radiation effects were reported.

To perform physical examinations and interviews for about 40 people who had clear symptoms, Mr. Tamagaki traveled around mountainous areas in one of ABCC’s 4WD vehicles. He found that at least two people had presented with typical acute symptoms of radiation exposure—such as hair loss, bloody stools, or purple spots on the skin—and died within several months. Some of this group experienced bleeding from the gums. Mr. Tamagaki became convinced there must have been effects from radiation exposure due to entry into the city area right after the atomic bombing. Nevertheless, the investigation was not continued.

Why was the study halted? Some of the circumstances at that time were described in a document that Hiroko Takahashi, professor at Nara University, obtained at the U.S. National Academy of Sciences, among other sources. The report was authored by Lowell Woodbury, who served as chief of the Biostatistics Department at ABCC during the period 1952–1958.

In response to the preliminary study conducted by Mr. Tamagaki and others, Mr. Woodbury’s report indicated that, “In December 1953, the Research Committee approved a project (ME - 81 Effects of Residual Radiation).” However, the report also added, “Due to other work pressures and a shortage of investigators,” the project was not undertaken. Mr. Woodbury concluded the report by writing, “It is a question that requires more detailed investigation,” in order to identify whether those symptoms were caused by residual radiation.

Mr. Tamagaki directly informed scientists from the U.S. Atomic Energy Commission (AEC) of his study’s results, but his concerns were rejected after the scientists told him that such symptoms might have been due to an infectious disease. Ms. Takahashi said that ABCC obtained information on symptoms observed among those who had entered the city area soon after the bombing from the Japan Post Hiroshima-Teishin Hospital, located in Hiroshima’s Naka Ward, around the same time. “I believe the U.S. researchers must have been interested in this issue. However, as they had to adopt a stance of denying the effects of residual radiation, their decision might have been influenced by a sense that the data were unfavorable for them,” assumed Ms. Takahashi.

Organization’s view has not changed

In 1975, ABCC was reorganized into RERF, which is jointly operated by the governments of Japan and the United States. RERF still supports the view that the effects of residual radiation on the health of people who entered the city shortly after the bombing were insignificant enough to be able to ignore, when considering the entirety of risk for all A-bomb survivors, arguing that the analysis of 4,512 people who entered the city area within one month after the atomic bombing did not provide any evidence of an increased rate of death. Kotaro Ozasa, chief of RERF’s Epidemiology Department, added, “Radiation exposure for individuals is very complicated, given that exposure conditions differ depending on when and where they passed through the city. There is no basis that would allow us to determine whether or not an individual was affected by residual radiation.”

What did local physicians observe when they met with those who had entered the city soon after the bombing? The Chugoku Shimbun visited a hospital in Higashihiroshima to seek more information about Koji Takeshima (who died at the age of 90 in 2007), a physician who worked at ABCC from 1947 to 1954 and was also involved in the study. Yuji Takeshima, 56, Mr. Takeshima’s oldest son who serves as the hospital director, answered our questions.

“My father told me that he had worked on the research by cutting into his sleeping time,” said Yuji. Tetsuyuki Takeshima, Koji’s younger brother who worked at the Hiroshima prefectural government offices, was killed in the atomic bombing. Ayame Takeshima, his older sister (who died at the age of 101 in 2015) entered Hiroshima after the bombing to find her brother. Speculating about his father’s feelings, Yuji explained, “He must have also wanted to identify the effects of residual radiation for the sake of his sister.”

Mr. Woodbury’s report has attached to it a report written by Mr. Takeshima in April 1953 and addressed to the ABCC chairman at the time. It reads, “It is of course impossible to ascribe the symptoms shown in these cases to residual radiation; yet several are quite consistent with radiation damage.” His words imply his frustration about being caught between two differing opinions: his organization’s official stance and his own realization as a physician in Hiroshima.