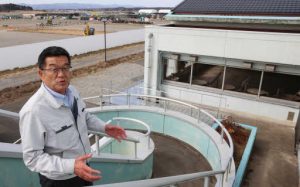 
Hopes rest on young people, as deserted town turns into wasteland
One young man will return to Namie Town in Fukushima Prefecture this spring. Nao Watanabe, 24, was a second-year junior high school student when the evacuation order for the entire village was issued because of the accident at the Tokyo Electric Power Company’s Fukushima No. 1 (Daiichi) nuclear power plant. Mr. Watanabe, with his family members, fled to Nihonmatsu City in the same prefecture. After graduating from college in Fukushima Prefecture, he started work at a construction company in Niigata Prefecture. Recently landing a new job in Namie, he will return to the town after 10 years. His hope is to “be of use to my hometown.”

Koji Suzuki, 68, encouraged Mr. Watanabe to return. Mr. Suzuki is the secretary-general of the town’s social welfare council and worked alongside with Mr. Watanabe’s father when they worked for the municipal government. Mr. Suzuki said with emotion, “Nao was a sincere and kind child. I believe that the energy of his kind of young person is essential for the future of Namie.”

Those in the fishing industry have not returned

The town’s appearance has changed completely. Before the accident, the town had a population of 21,000, but it now has only about 1,600 residents. Even after the evacuation orders were lifted for most of the town in 2017, former residents have been slow to make their way back. The percentage of elderly among the town’s total population is about 38 percent, more than 10 percentage points higher than before.

Mr. Suzuki was engaged in fishing work and lived in the Ukedo coastal area. Now the region is a wasteland. “My house must have been around here, but even its foundation was lost when they leveled the ground,” he explained. The community of 1,600 people was hard hit by the tsunami, with more than 150 people killed or missing.

Located about six kilometers to the north of the nuclear power plant, the town did not experience as much radioactive fallout as other areas, thanks to the offshore winds from the ocean. The Ukedo fishing port was damaged by the tsunami, but it was restored in the spring of 2017. However, some involved in the fishing industry still commute from Minamisoma, a city located directly north of the town, and other places.

“The evacuation orders were in place for too long. Many lost the desire to return,” said Mr. Suzuki. He quit fishing and built a house in Fukushima Prefecture’s Shinchi Town, close to the border shared with Miyagi Prefecture. He also rents a house in Namie and commutes to the town’s social welfare council from there.

Closed school buildings to be opened to public

Although it will be difficult to rebuild the town as it was before, the question remains—how should records and memories be passed on to future generations? With that in mind, prefectural and municipal governments are working to preserve remains of buildings damaged by the disaster.

The building of the former Ukedo Elementary School stands about 300 meters from the shore. The tsunami reached the floor of the building’s second story, sweeping away desks, chairs, and school kitchen equipment. The 11 first-graders had already left school when the tsunami hit. All of the 82 other students and 14 school staff were saved after fleeing to a hill 1.5 kilometers away. The school building has been undergoing repairs before it opens to the public before the end of this year.

When the building was completed in 1998, Mr. Suzuki served as president of the school’s parent-teacher association. He has shown an interest in what to exhibit and what message should be delivered. “Why is Fukushima lagging behind Miyagi and Iwate prefectures in terms of reconstruction? Why are people not coming back to Ukedo? We have to clearly inform people about the nuclear power plant accident.”