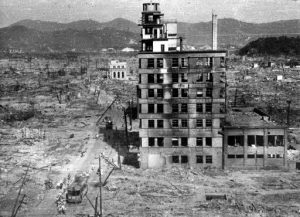 
Group of Chugoku Shimbun writers were starting point of media coverage about atomic bombing
Learning of situation in Hiroshima, woman reporter entered city on her own

The atomic bombing of Hiroshima on August 6, 1945, also struck a devastating blow to the city’s media functions. The headquarters of the Chugoku Shimbun, the only newspaper published in Hiroshima Prefecture at the time, was burned to the ground, with as many as 114 employees killed. Surviving journalists formed a group called the “Kudentai” (roughly translated into English as the oral reporting corps), which communicated information related to devastation from the bombing quite literally through their voices on the ground. The corps was the beginning of A-bomb news coverage from Hiroshima.

According to the publication “Chugoku Shimbun 65-nen Shi” (in English, the 65-year History of the Chugoku Shimbun Newspaper) in 1956, a time when those who had experienced the atomic bombing were still alive and well, the Kudentai journalist group was formed on the day following Hiroshima’s destruction in the atomic bombing, upon request by the Chugoku Military District Headquarters. The book explained that, “Instead of a pen and notepad, the Kudentai members held a megaphone in one hand and reported the news from the back of a truck until their voices grew hoarse.” The publication introduced the names of three male Kudentai members, followed by the name “Natsue Yashima.”

The Asahi Shimbun newspaper on August 10, 1945, published by its Seibu Head Office, carried a photograph of a woman appearing to be the female Kudentai reporter. The Asahi photo, taken in Hiroshima, was captioned, “A female press corps member gently encourages war victims.” Asahi Shimbun journalists had come on assignment to Hiroshima from the city of Kokura (now part of Kitakyushu) in Fukuoka Prefecture.

The three male members of the Kudentai were the associate editor, the associate manager of the news department, and a member of the research department. The Chugoku Shimbun resumed publication of the paper at its headquarters on November 5, 1945. According to the original records of announced appointments between November 5 and December 1945, the following month, Natsue Yashima appears to have been appointed as a junior employee at the copy editing department. No records of her joining or resigning from the company remain, however.

Who was Ms. Yashima? How did she handle the unprecedented situation that presented itself in Hiroshima? Investigating her family name of “Yashima,” the Chugoku Shimbun learned her niece’s family resided in Hiroshima, and with that, discovered that Daijo Yamada, 66, Natsue's oldest son, now lives in Tokyo.

Mr. Yamada said, “This was the first time I had ever heard the term Kudentai.” He helped disclose a note his mother had written as part of her application for an Atomic Bomb Survivor’s Certificate, which she obtained in Hyogo Prefecture in 1978. She had apparently also worked at the Kyoto Shimbun before her son was born. When we inquired of that newspaper, her personal records from the time she entered the company were found to have been kept in storage there.

Twenty-seven-years old at the time of the atomic bombing, she was originally from Hiroshima’s Hiratsuka-cho (now part of Nishihiratsuka-cho, Naka Ward) and graduated from Hiroshima Prefectural Girls’ High School (now Minami High School). In 1941, the year Japan started the war with the United States following the country’s enhancement of its National Requisition Ordinance, she worked for the Imperial Japanese Army’s shipping department, located adjacent to the Ujina Port. Her records indicate that she started working for the Chugoku Shimbun in 1944. In those times, along with munitions factories, the newspaper company was positioned as a critical component of Japanese society.

In her memoirs, Ms. Yashima wrote that she learned of the abnormal situation in Hiroshima on the night of August 6, and desperately pleaded until she was allowed to ride in an aid truck embarking from the town of Kake-cho (now part of Akiota-cho, Hiroshima Prefecture) with other passengers. Starting the day before, August 5, she was on leave from work and visiting the home of her friend located near the entrance of Sandankyo Gorge, a natural area located a distance from the city in Hiroshima Prefecture’s north.

According to a note written by the head of the Hiroshima District 12 Special Police Force in the county of Yamagata-gun (recorded in the book “Genbaku-ka no Shirei Bu” [Military Headquarters under the Atomic Bombing], published in 1976), about 250 rescuers including elderly men gathered at Kake National School at 12:00 midnight on August 7. They rode on different trucks and entered the area known as Yokogawa-cho (now part of Nishi Ward) around 5:00 a.m. in the early morning.

Ms. Yashima followed the same route on her own. After she was forcibly removed from a truck at the village of Imuro (now part of Asakita Ward), she hopped on a river boat and headed to the town of Kabe-cho (Asakita Ward). She walked from there and arrived near the iron Yokogawa Bridge around 1:00 p.m.

She wrote, “Seeing many bodies lying here and there, I did nothing but walk toward the Chugoku Shimbun building completely numb without even a sense of fatigue.” The building was located in Kaminagarekawa-cho (now the area of Ebisu-cho, Naka Ward), about 900 meters to the east of the hypocenter. “Everyone was stunned there, but Ms. Hirose and I shared with each other our joy of being safe and alive.” Mieko Hirose, then 36, was a senior colleague and a graduate of the high school attended by Ms. Yashima, who joined the company in 1943. Ms. Hirose wrote Ms. Yashima’s occupation at the time of the bombing as “Employed at (the Chugoku Shimbun’s) copy editing desk of the editing department,” on Ms. Yashima’s Atomic Bomb Survivor’s Certificate.