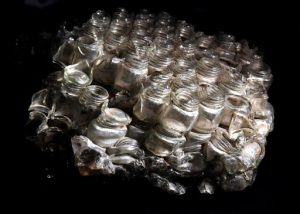 Dozens of bottles were melted together from the heat of the atomic bombing. Minoru Fujitsuka (who died in 1998 at the age of 72), then a 19-year-old soldier, found the bottles in the Matoba-cho area (now part of Minami Ward) in Hiroshima, about 1.8 kilometers from the hypocenter, where his home had been. The glass bottles involve an emotional connection he felt with his deceased brother.

In June 1945, Mr. Fujitsuka headed for Yamaguchi Prefecture, where his unit was stationed. His brother Tadashi, then four, came to see him off at the Hiroshima train station. A station worker tried to prevent Tadashi from going onto the platform, but he ran to the train and repeatedly called out to his brother as he knocked on the train window. “When will you be back?” he asked. “Soon,” his older brother replied. With that, the train pulled out of the station.

On August 6, thermal rays from the atomic bombing overwhelmed Tadashi as he was playing around Kojin Bridge near his house in present-day Minami Ward, about two kilometers from the hypocenter. The skin on the back of his head was torn off, and he suffered severe burns over his entire body. The family fled to an air-raid shelter where they stayed overnight. Tadashi laid down and repeatedly sang a song about carp streamers he had learned in kindergarten. He breathed his last breath the next morning.

Mr. Fujitsuka returned to Hiroshima in late September and, for the first time since the atomic bombing, visited his house’s incinerated remains. Learning that his younger brother had died, Mr. Fujitsuka walked around the city in a state of shock. Later, he discovered the melted glass bottles at the location of a former ink factory that had once stood in front of his house. The melted bottles might have stirred in him feelings about his younger brother, and he murmured, “It must have been so hot.”

Mr. Fujitsuka donated the bottles to the Hiroshima Peace Memorial Museum in 1966. His third daughter Mariko Tanaka, 62, a resident of the city’s Aki Ward, spoke about how her father had said mournfully, “I was ready to die for my country, but my little brother died instead.” Ms. Tanaka, who guides visitors around the museum as a Hiroshima Peace Volunteer, stopped in front of the exhibit with the glass bottles and explained to museum visitors about Tadashi and her father.