Striving to fill voids in Hiroshima 75 years after the atomic bombing—Duty passed on to next generations, Part 4: Addressing problem anew 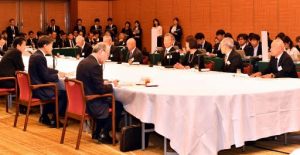 What kinds of damage caused by the atomic bombing are still not fully understood? In addition to comprehending the current situation, the reasons why the damage has not been fully grasped must be clarified, understanding that will form the foundation for new findings. Through news-gathering efforts, the Chugoku Shimbun has found unfairness, in that “damage” suffered by people without an Atomic Bomb Survivor’s Certificate tends to escape attention and results in “voids” in such information.

In an interview of an official at the A-bomb Survivor Support Office of Japan’s Ministry of Health, Labour and Welfare, the Chugoku Shimbun asked about unclaimed remains. We told him that the Hiroshima City government has been searching for victims’ families and asked him how the national government would deal with the issue. “I didn’t know about that,” he replied.

He added, “This office supports and provides relief to living survivors. I wonder whether the national government should be involved in returning the remains of dead victims.”

The national government has been consistent in trying to focus on support of those who survived the atomic bombings since the end of World War II.

One example of this situation are orphans who were not with their parents at the time of the atomic bombing, because they had been evacuated to safer locations. If such orphans did not have an Atomic Bomb Survivor’s Certificate, they were not provided support.

People outside the framework of relief measures can easily escape attention. Unclear is how many children became orphans because of the atomic bombing. Children who were evacuated to safer locations are today in their 80s. Now is the time the history of their hardships and lost family members should be recorded for posterity. Yoko Kubo, 81, a resident of Kaita, Hiroshima Prefecture, lost five members of her family, including her parents. Ms. Kubo remarked, “I want people to know there are victims like us.” Her words carried weight.

The Japan Confederation of A- and H-Bomb Sufferers Organizations (Nihon Hidankyo) and other A-bomb survivors’ groups have been calling on the national Japanese government to launch investigations into all of the victims and provide compensation to their surviving family members, claiming the national government was responsible for the action since it conducted the war. Nonetheless, the government has been reluctant to act, making clear its intent and the background of its attitude.

Records of remarks made by the then Minister of Health and Welfare Ryutaro Hashimoto in 1979 during a meeting of leading experts on a private advisory body have been disclosed. According to the document, Mr. Hashimoto said, “I was extremely afraid that if the damage caused to lives and health by the atomic bombs, which are special weapons, were to be covered under national compensation, there would be calls to include general war victims in the same way.”

All generations must take interest

As this year marks the 75th anniversary of the conclusion of the war, families of victims, including those of the Great Tokyo Air Raid, have been urging the national government more stridently to offer relief measures and conduct fact-finding surveys. When a meeting is held on August 6 to coincide with the Hiroshima Peace Memorial Ceremony, the Hiroshima Prefectural Confederation of A-bomb Sufferers Organizations (Hiroshima Hidankyo, chaired by Sunao Tsuboi) will once again urge government officials to convey condolences to all of the victims of the atomic bombings and their bereaved families.

The efforts to find the actual extent of the damage caused by the atomic bombings and the war will be carried over into the future. All generations must be attentive to this issue.

Education forms the foundation of society and must be paid special attention. We looked through 78 textbooks on social studies and history used in elementary, junior high, and high schools. Currently, most textbooks limit explanations about the damage caused by the atomic bombings to only two or three lines.

Most explanations indicate that “about 140,000” people died by the end of 1945 in the atomic bombing of Hiroshima. None says that this number represents only an estimate, that there are many missing victims, or that the city to this day continues to conduct surveys into the victims.

“The reality is that horrors of the atomic bombing will not be understood through textbooks alone,” said Hiromu Morishita, 89, a resident of Saeki Ward. He was seriously wounded in the atomic bombing but played a major role in peace education as a high school teacher for many years. Together with teachers’ unions in Hiroshima and Nagasaki, he compiled reading material on peace titled Asu ni Ikiru (Living in Tomorrow) in 1974. Based on student feedback, several revised editions have also been published. That was before the Hiroshima City government’s initiative to make supplementary materials for elementary, junior high, and high school students.

To clarify the damage done to his school, Mr. Morishita carried out surveys of his classmates at the Hiroshima First Middle School, as it was known under the pre-war education system. “In addition to the accounts of A-bomb survivors’ experiences, it is necessary to provide objective facts to have people realize the horrors of the atomic bombing,” he said. He also thinks that if younger generations were to be assigned such unfinished “homework,” more people of those ages would willingly get it done.

We have also received feedback from A-bomb survivors who know what happened on “that day.” Some said that they never had any doubt about 140,000 people being the number of victims. The reality regarding the damage from the atomic bombings is far from clear. We must tackle this issue as an ongoing one and address it anew.