Striving to fill voids in Hiroshima 75 years after the atomic bombing—Duty passed on to next generations, Part 6: Never give up 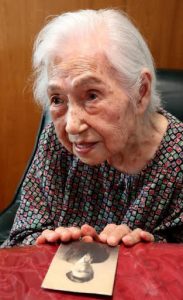 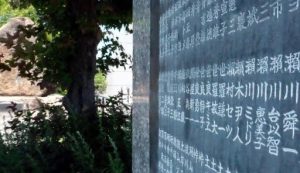 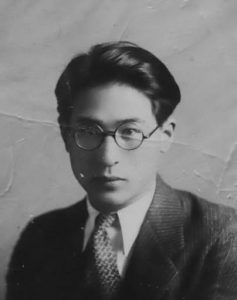 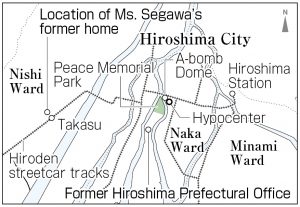 Life of each victim should never be forgotten
Grief of bereaved families unchanged since that day in 1945
by Kyosuke Mizukawa, Yuji Yamamoto, and Minami Yamashita, Staff Writers

“I was wishing somewhere in my heart that my husband might still be alive, but I think it’s time to give up hope,” said Michiko Segawa, a resident of Hiroshima’s Asaminami Ward. She carries in her purse a photograph of her husband, Shunichi, who was four years her senior. Whenever she takes the photo out to look at it, she sheds tears.

The 104-year-old woman contacted the Chugoku Shimbun after reading a series of its feature articles. She shared with us her feelings for Shunichi, who she has not seen for 75 years.

Ms. Segawa moved around Japan in her childhood due to her father’s work. After the family experienced the Great Kanto Earthquake in 1923, they stayed with relatives in Hiroshima Prefecture for a time. In 1934, Michiko, then 18, married Shunichi through an arranged marriage. She settled down to a new life in Hiroshima.

Shunichi, a prefectural government employee in the accounting department, turned out to be as kindhearted a person as her first impression of him had been. He often played with their four children and gave them baths. “One time, I told him I wanted a cream puff, and later he brought one home for me,” Ms. Segawa said. The family was warm and affectionate with each other even after the war situation deteriorated.

On the morning of August 6, 1945, Shunichi left their home, located in the present-day Takasu district (Nishi Ward), for work. He never returned. The prefectural government building, which stood about 900 meters south of the hypocenter, was burned to the ground, taking with it the lives of more than 1,140 employees. His brother searched around the burned ruins but ultimately was unable to find Shunichi.

She said she feels a lump in her throat when recalling those days. Akiko, 84, Ms. Segawa’s oldest daughter, who was present at the interview, continued on. “My mother used to go out onto the porch every day, doing nothing but staring at the city in flames.”

Later, Ms. Segawa received a wooden box from the prefecture, in which were said to be the remains of her husband. Inside the box seemed to be round, hard objects. She was unsure whether the contents were actually human remains, much less her husband’s. Without looking inside, she buried the box in a grave. With the belief that “If his remains were buried somewhere, they’d be under the ruins of the former prefectural government building,” she has joined her hands in prayer before the monument for Hiroshima prefectural government employees who died in the atomic bombing, which includes Shunichi’s name. Having raised four children, Ms. Segawa is now blessed with a total of 20 grandchildren, great-grandchildren and great-great-grandchildren, and has lived a quiet life. Even so, it is still heartbreaking for her to remember the “happiest ten years of my life with my husband.”

Like Ms. Segawa, there are people who continue to wonder about their lost family members. The damage caused by the atomic bombing is often explained using the huge numbers of lost lives or the bomb’s destructive power, but are we truly conscious of the life of each victim?

Our reporting clearly shows there is a “void” in information regarding some of the victims that do not show up in official records or have faded from memory.

One A-bomb survivor called to inform us that the survivor had seen a baby just like the one at a first-aid station that was introduced in one of our reports. Another reader contacted us with concerns that a family in the reader's neighborhood who had been wiped out in the atomic bombing might not be included in the city’s statistical survey of A-bomb victims.

A-bomb survivors who experienced that day, August 6, 1945, as well as others, try to provide information, knowing it is a difficult task to identify victims whose whereabouts and names are unknown. We came to share their sense of crisis that the chance to fill such voids might be completely lost unless action is taken now.

According to the statistical survey of A-bomb victims carried out by the Hiroshima City government, the number of people whose names have been identified and had died by the end of 1945 was 89,025, as of the end of March last year. There is a significant disparity between that number and the more generally accepted death toll of 140,000 people plus/minus 10,000. With that in mind, it is clear that countless remains of unclaimed A-bomb victims have still not been returned to family.

We fully realized the difficulty of finding even one victim as we endeavored to understand the voids in such information. At the same time, we are convinced that not everything that could be done has been.

The remains of one victim that had been kept in the Atomic Bomb Memorial Mound was returned to bereaved family as a result of our persistent work in comparing multiple documents held by the national government and the city. At other times, we found Korean victims from the Korean Peninsula by checking the records available in South Korea. Such examples are likely only the tip of an iceberg. We have just confirmed the name of a former resident killed at the very location where the Hiroshima Peace Memorial Museum now stands. Our efforts prove that a few reporters on their own can achieve so much.

If the public and governments can work together by bringing together materials and other information, additional voids can be filled. We have a special responsibility, a duty, to take up such work. To consider that effort as being somebody else’s problem and let it fade into oblivion is equal to considering that the catastrophic damage caused by the atomic bombings was an “unavoidable past that has to be accepted.” Such a situation would only lead to further human misery again at some time in the future.

We must never give up.