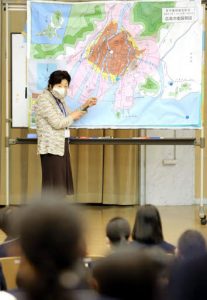 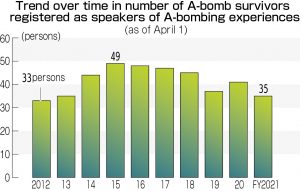 With declining speaker numbers as aging survivors retire or die, debate about how A-bomb memories should be passed on
As one attempt, training period shortened, burden lightened

A total of 34 A-bomb survivors between the ages of 78 and 93 appear on Hiroshima City government’s list of survivors who convey their experiences of the atomic bombing to tourists and students on school trips. The testimonies are in high demand, but such survivors are aging. With instances of death and retirement, the number of available speakers is on the decline. As a result, the Hiroshima City government has shortened the period of training to one year from two and has begun recruiting new speakers for the new fiscal year. This article looks into different ways people are trying to pass on memories of the atomic bombings.

“My father had terrible keloid scars because of the atomic bombing and lost the energy to work,” explained Junko Yamase, 84, a resident of Hiroshima’s Naka Ward, in Peace Memorial Hall at the Hiroshima Peace Memorial Museum in late April. Ms. Yamase was speaking to around 130 students from Sanyo Jogakuen High School, located in Hatsukaichi City, Hiroshima Prefecture.

Ms. Yamase was eight when she experienced the atomic bombing in the area of Danbaranaka-machi (now part of Minami Ward), about 2.2 kilometers from the hypocenter. Her father was closer to the hypocenter than she had been. He suffered severe burns on his neck and hands because of the bomb’s thermal rays. His injuries caused his arms and fingers to be fixed in bent positions.

During her one-hour talk with the students, Ms. Yamase referred to the circumstances surrounding the atomic bombing of Hiroshima by the United States and the current world situation in terms of nuclear weapons. “Listening to her experience,” said Mei Yamamoto, 16, a second-year student, “I’ve become more motivated to work on peace activities.”

Ms. Yamase began recounting her experiences in that way last fiscal year after undergoing a two-year training period. She began thinking of sharing her experiences after her return to Hiroshima from Shimonoseki City, Yamaguchi Prefecture five years ago. “I felt uneasy about starting something new in my 80s, but I wanted to do something,” she said. To this point, she has spoken about her experiences with the atomic bombing in 12 sessions. Because of the coronavirus pandemic, however, a good number of her recent sessions have been canceled.

In Hiroshima, A-bomb survivors’ and peace organizations, as well as citizens’ groups have been supportive of survivors’ efforts to share their accounts for numerous years. Many in the ranks of speakers were teachers who taught about the atomic bombing. Following a rapid increase in the number of students visiting Hiroshima on school trips, the city government began to register speakers to communicate their experiences in 1983. A training system for the program was introduced in fiscal 2012.

During the training, survivors first learn basic knowledge about the devastation caused by the atomic bombing and methods for delivering their talks. They write their experiences down on paper and practice speaking to improve their expressiveness. After completing the training, they receive a commission letter from the city’s Peace Culture Foundation before making their debut as a speaker.

According to the museum’s Outreach Division, five of the 41 speakers have died and one has retired because of ill health in the last fiscal year, which ended in March. Emiko Okada, who had passionately called for the elimination of nuclear weapons both in Japan and overseas, died on April 10 at the age of 84. With that, the number of speakers has decreased to 34. Some of the speakers are not in good health and cannot deliver their accounts of the atomic bombing. Some of the others cannot travel to session venues without help from family members.

The situation surrounding the program is in a new phase. For the first time since the program’s start in 2012, no applicants applied to serve as speakers for the program last fiscal year, according to the city’s Peace Promotion Division.

“The coronavirus pandemic might have affected the situation, but the problem has existed for some time,” said Ayumi Inada, manager in charge of the city’s efforts to preserve A-bombing experiences. The training period has been shortened to lessen the burden on A-bomb survivors and allow them to begin sharing their experiences more quickly. The training period was shortened by reducing the time necessary for writing their experiences, she said.

Iwao Nakanishi, 91, a resident of Kure City, Hiroshima Prefecture, has been sharing his experiences. “It’s better not to set strict conditions so as to encourage new members to join us,” he said. Mr. Nakanishi has been accepting as many requests as he can, including those that do not come through the Peace Museum. “Those who are able should continue conveying their experiences. There is nothing else we can do.”

The city government will also shorten the training period for ‘memory keepers,’ younger people who play the role of communicating to the public the survivors’ experiences and their hopes for peace, to two years from three. That change took place because some people could not complete the ordinary training program for family- or work-related reasons. Applications for both A-bomb survivor speakers and the memory keepers for this fiscal year will be accepted until June 15.

Due to the spread of the coronavirus, the Peace Museum is now closed temporarily for the third time. The speakers can convey their experiences online, but not face to face. Under these trying circumstances, Ms. Yamase has been studying the actual devastation caused by the atomic bombings and the present world situation concerning nuclear weapons. “I want to provide correct answers to whoever asks me. That is the responsibility of us who communicate our experiences.” Those who listen to their accounts must take their sense of purpose seriously and explore what they themselves can do now to pass on the experiences of the survivors.

In Nagasaki, A-bomb survivor training is six months, with applications accepted throughout year

Aging of those who communicate their experiences is also a problem in Nagasaki, the other A-bombed city, and Okinawa, where many died in land battles.

Forty-two A-bomb survivors between the ages of 77 and 94 are registered at the Nagasaki Foundation for the Promotion of Peace. Information such as their names, age at which they experienced the atomic bombing, and outlines of their A-bombing experiences is posted on the foundation’s website. Applicants for the role have to submit a 4,000-character (about 2,000 words in English) essay and undergo an interview. Those finishing the six-month training period can begin providing their accounts.

According to the foundation, the number of A-bomb survivors providing testimonies is consistently around 40, mainly because applications are accepted throughout the year to ensure that A-bomb survivors can apply whenever the spirit moves them. New energy has come into play as well, with those registered having encouraged other survivors to join, and people who were between 0 and 3 years of the age at the time of the bombing beginning to join the group.

In Nagasaki, a total of 44 younger people relate the experiences of the atomic bombing to following generations. A characteristic of the system is that the group includes people who tell the experiences of family members and relatives.

Himeyuri Peace Museum in Itoman City, Okinawa, conveys the experiences of “Himeyuri students,” who were mobilized in the Battle of Okinawa. The last lecture by a former student at the museum was given in March 2015. At present, in their place, five staff members of the museum’s curatorial division convey to students on school trips what such students experienced.

Still, before the coronavirus pandemic those in their late 90s conveyed their experiences to children on an irregular basis, and when the program might restart is unclear. “It’s now difficult for them to give accounts directly, but we hope their thoughts can be conveyed through our exhibits and so on,” said a museum staff member.