Striving to fill voids in Hiroshima 75 years after the atomic bombing—Recreating cityscapes: Kokutaiji-cho schoolhouse, where dreams were fostered 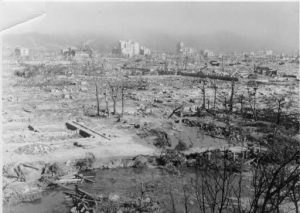 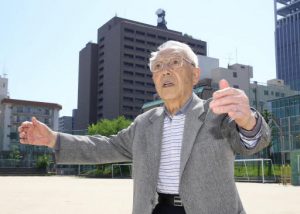 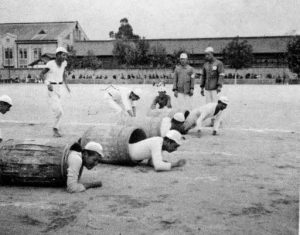 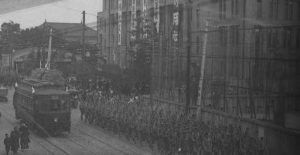 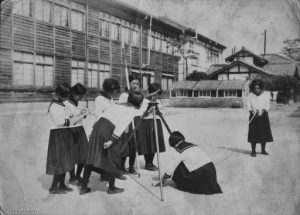 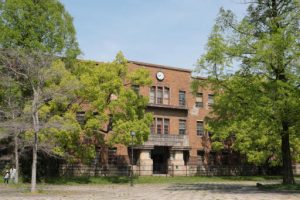 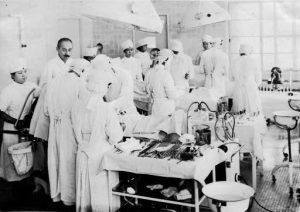 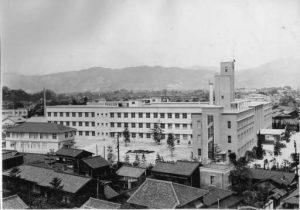 The area in and around Kokutaiji-cho, now part of the city’s Naka Ward and located slightly south of the center of Hiroshima City, is marked by a concentration of department stores, shops and financial institutions but at one time contained Hiroshima’s City Hall, the Hiroshima Red Cross Hospital, and several local prestigious schools. Seventy-five years ago, the lives of many young people were lost there. The Red Cross Hospital was overwhelmed with the mortally wounded. Aided by photographic albums and other materials archived by schools and alumni associations, the Chugoku Shimbun herein attempts to unravel that cityscape destroyed in the atomic bombing.


Few classes held in shadow of war
Many students were killed during mobilization work
A March 1942 graduation photo album of the First Hiroshima Prefectural Junior High School (now Kokutaiji High School) contains images of energetic students at school athletic meets, such as scenes of relay runners and of male students desperately making their way through barrels in an obstacle course.

“I was blessed with wonderful teachers and friends. I’m still proud that I attended the First Hiroshima Prefectural Junior High School,” said Shunkichi Fukuma, 88, a resident of Nishi Ward who entered the school in 1944, who explained his feelings about the school with nostalgia. However, he said he has few memories of the classes themselves. In August, the Japanese national government issued the Student Labor Service Order, which was designed to make up for labor shortages that arose during the war. Even junior high school students were forced to work at munitions factories and in the fields.

On August 6, 1945, almost all of the school’s approximately 300 first-year students were killed in the atomic bombing at and around the school in the area of Zakoba-cho (present-day Kokutaiji-cho).

On the day of the atomic bombing, private homes around Hiroshima City Hall were being demolished to protect facilities essential for war efforts from the spread of fires resulting from air raids. Students in odd-numbered grade years were mobilized to help tear down buildings, while those from even-numbered grades stood by on the school’s grounds. Both grade groups were within one kilometer of the hypocenter.

That day, the First Hiroshima Prefectural Junior High School lost a total of 369 people, including teachers and staff. Mr. Fukuma, then a second-year student, had been sent to work at a factory in Hatsukaichi City, west of Hiroshima City. As a survivor, since the end of the war, he has kept in mind the sorrow and regrets of the younger students. “When I stand at the monument, I can hear the A-bombed students’ skillful rendition of the school song.” He dedicated a short poem he crafted at the school’s memorial service held around the end of July last year.

In Hiroshima, students between 12 and 14 years of age from various schools were mobilized for building demolition work. According to the Hiroshima Peace Memorial Museum, more than 8,200 students were exposed to thermal rays from the atomic bombing at six different locations, mainly in the city center, and approximately 6,300 are estimated to have died. “Zakoba-cho” transformed into a term that signified the sacrifices made by the young students who carried out the mobilization work.

At the Hiroshima Prefectural First Girls’ High School (now Minami High School), located in the area of Shimonaka-machi (now Naka-machi), approximately 250 meters north of the First Hiroshima Prefectural Junior High School, the school buildings were completely destroyed. A total of 281 students, including first-year students who were helping demolish buildings in the area of Koami-cho, approximately 800 meters southwest of the hypocenter, died in the bombing.

Located at the location on which the school buildings once stood are a gatepost of the former main gate and a monument erected in memory of the A-bombed students. Kazue Sasaki (née Miura), 89, a resident of Naka Ward who was then a second-year student, visits the monument each time she passes close to the school. One first-year student who used to walk to school with her every morning was killed in the atomic bombing. That tragic situation still weighs heavily on Ms. Sasaki’s mind.

On the opposite side of Hiroshima’s Route 2 from present-day Kokutaiji-cho are located the remains of the former Hiroshima University Science Faculty No. 1 Building. As high-rise condominiums rise up in adjacent areas, the deterioration of the red-brick building stands out. The Hiroshima City government, which owns the building, decided to preserve parts the building and has started to push ahead with a plan to utilize the building as a center for peace research.