Survivors’ Stories: Yoshiko Niiyama, 86, Minami Ward, Hiroshima: Regretting not having been able to find her father 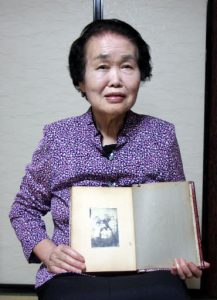 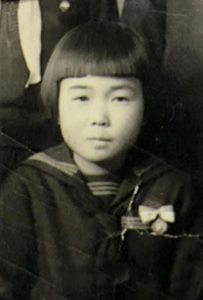 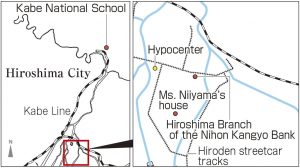 She desperately walked around, checking the bodies one by one.
by Kyoko Niiyama, Staff Writer

When Yoshiko Niiyama (nėe Kamikawa), 86, was 10 years old, she lost her father Mitsugi, then 47, in the atomic bombing. Two days later, she went into the central part of Hiroshima from the evacuation site and desperately searched for him, but his fate was unknown. She said, “I wanted at least to be present in his final moments.”

Back then, there were six people in her family: her parents, her three sisters, and Ms. Niiyama herself. In 1945, Ms. Niiyama attended Seibi National School―affiliated with the Hiroshima Army Kaikosha, located in the Motomachi area—from her home in Fujimi-cho (now part of Naka Ward). However, in April that year she was evacuated to the Kabe area (now part of Asakita Ward) with the help of an acquaintance and was transferred to Kabe National School (now Kabe Elementary School) because it was thought Hiroshima might also suffer an air raid by the U.S. military.

Ms. Niiyama lived with her grandmother, her aunt, and her cousin at the evacuation site, but she said she had been very lonely, being separated from her family. Around June, Mitsugi suddenly came to Kabe to visit them. He worried about Ms. Niiyama, who was the youngest in her family and a clinging child, and came to check on her.

After Mitsugi went to the school with Ms. Niiyama and greeted her homeroom teacher, he returned to his home. From the window of the school building, Ms. Niiyama kept watching his back as he walked towards Kabe Station. She said, “I had a premonition that something bad would happen.” That was the last time she saw him alive.

On the morning of August 6, she heard a loud explosion from a distance. After a while, people whose skin hung down in strips were carried to her school on trucks one after another. She thought all of her family might have died. Midnight that day, her mother and two sisters escaped to Kabe. Her mother had been trapped under rubble in her house but crawled out and suffered only minor burns. The other sister of hers was unhurt, too. Her house, however, was burned to the ground.

When the atomic bomb was dropped, Mitsugi had already been at the Hiroshima Branch of the Nihon Kangyo Bank, located only about 1 kilometer from the hypocenter.

By August 8, her father had not returned home, so Ms. Niiyama went to the central part of the city with her eldest sister from Kabe to search for him. Rubble was scattered about and the smell was appalling. They walked around, checking the clusters of bodies one by one.

The inside of the bank building burned down and only the exterior walls remained. “Mitsugi is at the foot of Sumiyoshi Bridge,” someone had written on the wall with charcoal. Using the blurred letters as a clue, they immediately went there to search for him but they were not able to find him.

For several days, they visited first-aid stations on Ninoshima Island and in the city of Hatsukaichi but could not obtain any information about him. Whenever Ms. Niiyama saw a well-built man who looked like her father, she ran up to him to check him out.

Later on, the person who had written the message with charcoal said to her, “A person, who was unrecognizable because of severe burns on his face, told me his name was Kamikawa.” Some people said he had collapsed shortly after they got him on the boat. When Ms. Niiyama thought he might have passed away alone in agony, she regretted not having been able to find him. She placed a teacup that was regularly used by her father into her family grave in the place of his remains.

Having lost their home, the surviving family members went to a relative’s house. After the war, she wanted to be a bank employee like her father and got a job at Hiroshima Bank. She married at the age of 24 and now has two children.

In 2000, she wrote her account of the atomic bombing for the booklet compiled by graduates of Seibi National School, which was forced to close because of the bombing. She has never shared her experience with anyone other than her family because she did not want to remember it.

Lately, her grandchildren (including this writer) helped organize the photos so she could leave her A-bomb experience to future generations. Thanks to them, she has been gradually able to talk about her experience positively. She said, “I hope people treasure family ties and feel the preciousness of human life.”