Striving to fill voids in Hiroshima 76 years after atomic bombing―Shichotai remnants as witness, Part 1: Man who played soccer as boy 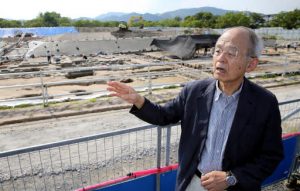 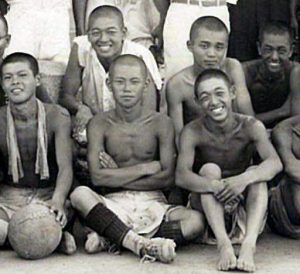 “I was surprised to find out that the remnants of the transportation unit, where my uncle had been until the atomic bombing, still exist on such a scale.” Masakatsu Takeyari, 76, a resident of Hiroshima City’s Minami Ward, visited the city’s Central Park, located in Naka Ward, in late June and looked out over the excavation site to the park’s inner open space, in the distance over a fence. The space represents the planned construction site for a new soccer stadium and is the location where barracks and other remnants of the former Japanese Army’s transport unit known as the Chugoku District transportation soldier recruitment unit (“Shichotai” in Japanese) have been discovered.

Shunji Okada, Mr. Takeyari’s uncle, was at the Shichotai facilities when he experienced the atomic bombing and died 76 years ago. Mr. Takeyari was born in January 1945, and thus has no memory of his uncle. However, Mr. Okada has always been on his mind since he was a child because his father, Shizuo (who died in 2001 at the age of 83), was close to his brother-in-law and often praised Mr. Okada as “a good man.”

“I wanted my uncle to be remembered among later generations through a book I wrote that tells how he lived his short life. I followed his footsteps to find things even his family wasn’t aware of.” When in his late thirties, Mr. Takeyari started compiling information in his spare time from Mr. Okada’s classmates. Although he worked for a company at that time, he completed the book over the course of more than a decade. The book, titled Hangon no Fu―Oji Okada Shunji no Shogai (Ode to the soul of the departed―My uncle Shunji Okada’s life, in English), was published in 1995. When he read an article from the Chugoku Shimbun dated June 15 this year about the unearthed remnants of the Shichotai unit, he sent a copy of the book to the reporter who wrote the story.

Mr. Okada was born in 1923 as the oldest son of a family who sold coal and alcohol wholesale in Tamano City, Okayama Prefecture. He entered Second Okayama Prefectural Junior High School under the prewar education system (Okayama second middle school, now Okayama Sozan Senior High School, in Okayama’s Naka Ward) and joined the school soccer team. He used to kick a stone as if it were a ball on the way to school. He gained experience on the nearby shipyard’s team on non-school days. His school team won the prefectural soccer tournament several times.

He also was passionate about film and literature. He and Shizuo, who was five years older, were kindred spirits on this point and would often go see movies together. His favorite director was Yasujiro Ozu. After he graduated from Okayama second middle school in 1942, he spent one year preparing for entrance exams, then went on to attend a university in Tokyo. He had dreams of becoming a film scriptwriter.

However, he received papers to serve in the military sometime in December 1943. Before he left his family home the following January, he repeatedly practiced dribbling and shooting alone silently on the soccer grounds of his Okayama second middle school. “It might have been his way of saying goodbye to soccer,” Mr. Takeyari said. Mr. Okada was assigned to the Shichotai unit after he went through basic training at military school.

On August 6, 1945, Mr. Okada was burned on his face and hands while at the barracks and was transported to an Army Hospital branch established at Hesaka National School (now Hesaka Elementary School, in Higashi Ward). Notified of his whereabouts, his mother Sakai rushed to the hospital in the morning on August 14, but he had already passed away before dawn on that same day. His father, Miyoji, was so sorrowful over his son’s death that he did not bury Mr. Okada’s ashes for three years, keeping them instead close at hand.

Among Mr. Okada’s mementos was a letter he had sent to his family expressing his anticipation of the birth of Mr. Takeyari. “I am as pleased as if it were my own son that a healthy little baby will soon join the family.” If it had been a time of peace, his family-minded uncle who loved sports and art would have lived a vibrant life. Mr. Takayari strongly regrets that the war broke out and that the atomic bomb was dropped.

Mr. Takeyari sincerely hopes that even part of the unearthed remnants of the Shichotai unit will be preserved because, for him, it serves as a witness to the fact that his uncle, who loved playing soccer in his school days, existed in this world. “My uncle would be happy if people could feel the preciousness of peace from both the artifacts of war and the atomic bombing as well as from sports,” Mr. Takeyari said with determination.

In this year marking the 76th anniversary of the atomic bombings, among the largest-scale A-bombed remnants that have ever been found were excavated in the central part of the city, which speaks to the truth that Hiroshima was once a military city. The atomic bomb dropped by the U.S. military took the lives of many people, their everyday life, and cityscapes. We hope to collect numerous such “witnesses” into which are etched the tragedies of war and the inhumane nature of nuclear weapons.