Striving to fill voids in Hiroshima 76 years after the atomic bombing—Records of mobilized students at First Girls’ School, Part 5: Passing on survivors’ wishes 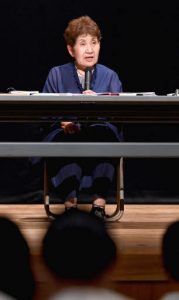 How can experiences and lessons be passed on to future generations?
Exploring how to fulfill duty to future generations
Mobilized students dispatched from Hiroshima First Municipal Girls’ School (First Girls’ School; now Funairi High School) worked in a spirit, “Filled with pure patriotic enthusiasm, without weighing personal advantages and disadvantages or seeking pleasure,” according to a document written by those charged with reviewing the students. Since that time, 76 years have passed, and most of the former students from the school still alive are more than 90 years of age. The work of conveying their experiences to current students at their alma mater has now fallen to the next generation of students.

On July 21, a mother’s note was read aloud by Reiko Hayashi, 80, in front of 322 first-year students at Funairi High School in the school’s auditorium. “No matter how many years have passed, I still remember my daughter’s cheerful voice I heard on the morning of that day and her tender heart.” The note was written by a mother whose daughter was a student at First Girls’ High School but never returned from the work of dismantling houses to create fire lanes for the war effort. Ms. Hayashi is a former student of the high school and an A-bomb survivor.

At the same time, she also read out a message entrusted to her by another survivor who had graduated from the high school. Ms. Hayashi told of the other survivor’s experience of working at a factory without undergoing any training. “War is destruction. Peace is dream and hope. If you make an effort, you can reach your goals.”

Kogiku Ino (née Nakashima), 91, who experienced the atomic bombing when she was a third-year student, had planned to speak to the students alongside Ms. Hayashi. But, with the coronavirus pandemic and experiencing a decline in her energy levels, she had to give up on the idea. As a result, only Ms. Hayashi took the stage. Ms. Ino does not have clear memories of the atomic bombing, as she was only four-years old at the time. But ever since she began taking part in the activities of the alumni association of First Girls’ School and Funairi High School 40 years ago, she has met with those who lost daughters, sisters, classmates, or younger students at the school. “I have witnessed people crying many times as they trace the victims’ names inscribed on the monument established for the victims. I will continue telling this story as long as I live.”

Students take Ms. Hayashi’s ideas to heart. “I had been taught about the thousand paper cranes for Sadako Sasaki, but I didn’t know anything about First Girls’ School or mobilized students from the school. I have a deeper understanding of the war now,” said Sakutaro Miyagawa, 15. Saori Makita, 16, said, “We should convey the wishes of students that went before us at our school to future generations.”

The high school has long held annual peace study sessions at which students learn about the darker side of its history. About 20 years ago, however, the class for listening to survivors’ accounts was made only available to first-year students. Tomoko Yanagi, 56, principal of the school, said, “Passing on the history of First Girls’ School is our duty. On the other hand, though, teachers are becoming younger year by year. We are all exploring how we can fulfill this particular duty of ours.”

The school’s library has a section dedicated to the former First Girls’ School. The school’s social-issues study club produced a booklet annually over a span of 15 years starting in 1984. The booklet series is titled What happened to Funairi High School (First Girls’ School) on August 6, 1945. Students interviewed 36 survivors and recorded their accounts for the publications.

Perhaps because the interviewers were high school students, the words spoken by the survivors sound as if they had opened up to the students and spoke directly to them. The booklets were placed in every classroom and were used in peace studies programs. Kaori Shimoda, 54, a teacher who was in charge of the club, said, “Students were highly motivated and created the booklets based on a sense of mission.” Nonetheless, the club was disbanded after issuing the 16th volume in 1999.

The end of that volume contains the “Non-nuclear, Peace Declaration” drafted by the club members in 1985. The declaration’s action proposal reads, “We will listen to as many survivors’ experiences of the atomic bombing and war as possible and pass that information on to future generations,” as well as the phrasing, “We will seek out materials involving the atomic bombing archived in our school and organize and preserve them in good condition.” The proposal is still highly relevant, despite being written 36 years ago.

The materials include primary sources of information about the war and the horror of the atomic bombing, as well as testimonies by those who survived the atomic bombing that day. Other accounts are of impressions recorded by younger people who listened to the direct testimonies of the survivors. All such elements must be connected if war experiences and lessons are to be passed on to future generations.

This concludes the series “Striving to fill voids in Hiroshima 76 years after the atomic bombing—Records of mobilized students at First Girls’ School.”