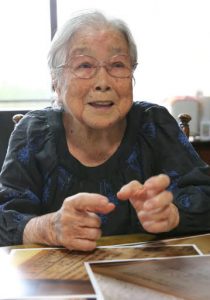 Before the atomic bombs were dropped on Hiroshima and Nagasaki, other major cities such as Tokyo and Osaka had suffered immense damage from air raids conducted by the U.S. military. In Hiroshima on August 6, many young people were killed while they were made to work to create fire lanes as part of the war effort to protect important facilities from fire damage. But not all parents or schools followed such orders from the military.

No questioning idea of ‘for country’

“I’m grateful to my parents because I’m alive thanks to them, and at the same time I feel sorry I survived while my classmates are still 13 years old,” said Naoko Kurokawa (née Kitayama), 89, a resident of Hiroshima’s Nishi Ward. She entered Hiroshima First Municipal Girls’ School (First Girls’ School; now Funairi High School) in April 1944. One of her former classmates is Miyako Yano, 90, who also lives in Nishi Ward. While other students went to dismantle houses to create fire lanes, Ms. Yano stayed home because she felt unwell, thus surviving the atomic bombing.

Starting in the fall of 1944, the number of classes gradually decreased at the school. When Ms. Kurokawa was working as a student volunteer at the Monopoly Bureau in Minami-machi (now part of Minami Ward), a cigarette was stuck in a machine, into which she reflexively inserted her fingers. The tip of one finger was cut and hanging loose, resulting in blood gushing from the wound. She barely escaped amputation of the fingertip. “Still, I had no doubt about working at that dangerous factory, because it was to serve my country,” said Ms. Kurokawa.

Ms. Kurokawa believes it was the day after the air raid on the city of Kure, which lasted from the night of July 1 until the early morning hours of July 2, 1945, that her father Kazuo Kitayama, then 40, came back to their home in the area of Daiya-cho (now Matoba-cho, Minami Ward) in a hurry after the night shift and said, “Hiroshima is in danger now.” He told his wife Futaba Kitayama to send their daughter to the town of Kisa (now Miyoshi City) where their relatives lived. Futaba, who died at the age of 68 in 1992, did as she was told.

On August 6, Kazuo was supervising work as supervisor of a second group of volunteers dismantling buildings to create fire lanes in the area of Kobiki-cho (now Nakajima-cho, Naka Ward). He was an employee of the Chugoku Shimbun. First- and second-year students of First Girls’ School were working in their vicinity. They were exposed to the blast and thermal rays of the atomic bomb at a distance of around 500 meters from the hypocenter.

According to Kazuo, he escaped the flames and spent one night immersed in the Tenma River. Before his eyes, a student of the school called out for her mother before her strength gave out and she was carried downstream by the river. Kazuo was taken to Kisa on August 10. Upon seeing his daughter, he declared, “Naoko could have been like that young girl in the river. I’m so happy I sent you here.” He breathed his last breath three days later.

At some schools, principals and teachers saved their students by preventing them from being mobilized.

Kimiko Imazumi (née Saeki), 88, a resident of Naka Ward, was a first-year student at Hijiyama Girls’ High School (now Hijiyama Girls’ Junior and Senior High School). According to The Record of the Hiroshima A-bomb Disaster, about 300 first- and second-year students at the school were scheduled to dismantle houses near Tsurumi Bridge, in the Hiroshima’s Naka Ward, on August 6, 1945.

Taking into consideration the air-raid alert issued the day before and the weather, Tamazo Kuninobu, principal of the school, sensed the risk of an air raid. He ordered students not to go to work but to remain on standby in their classrooms. “He always cared about the students. The principal’s words that day saved many lives,” said Ms. Imazumi. In spring the next year, she was admitted into the second-year class at the First Girls’ School. There would have been many students studying with her there in the classroom had it not been for the atomic bombing.

Teachers at the junior high school affiliated with Hiroshima Higher Normal School (now Hiroshima University Junior and Senior High School) opposed the military policy and sent about 240 students to the villages of Tono and Hara (both part of present-day Higashihiroshima) for safety under the pretext of having them work in agricultural villages.

Goro Toda, then a teacher at First Hiroshima Prefectural Junior High School, had some of the school’s second-year students stay home despite the fact they were scheduled to join in the work of dismantling houses. The school lost 353 students in the atomic bombing. Mr. Toda, who died at the age of 91 in 2003, wrote after the end of the war, “I decided it was much better to have them stay home than sending them to a dangerous place to die.”

The government and military, along with government offices and schools, pushed ahead with the war. Some teachers and parents, however, opposed their orders. All were adults who should have been working to keep children safe.