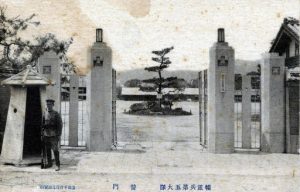 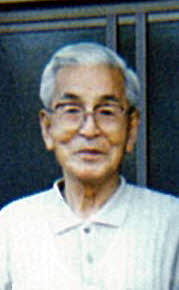 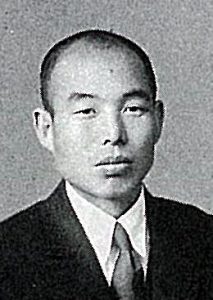 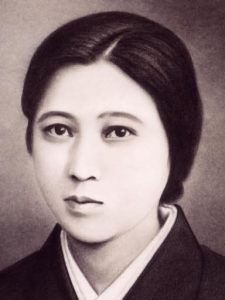 Reinforcement of soldiers continued in preparation for battle on Japanese mainland
Victims of atomic bombing after just being assigned to unit
by Kyosuke Mizukawa, Staff Writer

The former Japanese Army’s transport unit known as the Chugoku District transport soldier recruitment unit (“Shichotai” in Japanese) was situated in the open space of present-day Central Park, located in Hiroshima’s Naka Ward. On the letter that one of the unit’s soldiers, Shunji Okada, sent to his family from there was stamped “Censored by Watanabe.” During the war, detailed movements of the Japanese Imperial Army were kept a military secret. In fact, Mr. Okada wrote, “I cannot write details of our unit,” in his letter dated June 26, 1945.

Masakatsu Takeyari, 76, Mr. Okada’s nephew who lives in Hiroshima’s Minami Ward, wanted to ask Mr. Watanabe about those days as he was gathering data to write a book about his uncle. In 1992, Mr. Takeyari was informed by a former soldier of the unit that Mr. Watanabe’s first name was Shoji. With that, Mr. Takeyari looked for the name in telephone directories and found Shoji Watanabe living in Nagato City in Yamaguchi Prefecture. He was the head of the motorized unit to which Mr. Okada was assigned, and after the war worked as a high school teacher in Yamaguchi Prefecture.

Mr. Takeyari has carefully kept Mr. Watanabe’s personal account of those times, which were given to him by Mr. Watanabe before he died in 2004 at the age of 91. The account comprises 63 pages and represents a confidential record that cannot be found in the Hiroshima Peace Memorial Museum or the Hiroshima National Peace Memorial Hall for the Atomic Bomb Victims, both located in the city’s Naka Ward.

“The enemy is about to invade”

The account reveals the days just before the atomic bombing when the soldiers were forced to defend themselves amid intensified air raids instead of carrying out Shichotai’s original role of training soldiers and horses and sending them to the battlefront. Mr. Watanabe wrote in his account, “Every day I work very hard, moving munitions, keeping motor vehicles and weapons in good condition, building air-raid shelters for soldiers, and demolishing houses to build fire lanes.” When the Iwakuni Army Fuel Depot was bombed in May 1945, the soldiers went on the rescue operation in a couple dozen vehicles.

The account indicates that a sense of urgency had spread among the army troops in Hiroshima, as “the enemy was about to invade the Japanese mainland,” and that there was a move to prepare for the invasion. When he was alive, Mr. Watanabe conveyed to Mr. Takeyari about Mr. Okada at the time of the atomic bombing. “He was scheduled to go to Izumo in Shimane Prefecture before long.” The order was based on the assumption that the enemy would invade from the Sea of Japan side.

The Japanese army continued to recruit soldiers to prepare for the invasion of the U.S. military onto the Japanese mainland, with new soldiers also joining the Shichotai unit consistently in the summer of 1945. According to Hiroshima Shicho Heitai Shi (History of Hiroshima Transport Soldiers, in English), which was compiled after the war, there were “always about 1,000 soldiers” stationed there during the war, but a former Shichotai soldier wrote in his own account that the number of soldiers had increased to about 1,700 by the beginning of August 1945.

Satoru Koyama, a professor of philosophy and other subjects at Okayama Normal School (now Okayama University), responded to a call-up for military service and joined the Shichotai unit on June 25, 1945. He was 37 years old with three sons and one daughter, ranging in age from two months to 12 years. At a school farewell party, he said, “As a Japanese, I’m happy to go. But as a living being, I don’t want to go.” A biography of Mr. Koyama, written by his second son, Kiyoshi (who died in 2019 at the age of 80), conveys his father’s mixed emotions based on accounts of his colleagues.

Kiyoshi, who had gone to see his father off at Okayama Station, said, “Even though I was just a child, I had the thought that the war would soon be lost, because a teacher who was almost 40 years old had been drafted to fight.” A little more than one month later, Mr. Koyama experienced the atomic bombing around the barracks of the transport unit, and his remains have yet to be found. Many victims had similarly been assigned to the unit just before the atomic bombing.

In the military facilities where many soldiers lived, there were women who cooked and did other work. Yoshiko Minasaki, whose husband was overseas in a war zone, worked as a civilian employee of the Shichotai unit, all while raising her three sons.

Her third son, Takehiko, 84, a resident of Hiroshima’s Asaminami Ward, said, “I think she worked in a job related to clothing, but I’m not sure.” He clearly remembered waiting in front of the stone pillar gate for his mother to finish her work and going to the movies with her.

On August 6, 1945, Ms. Minasaki commuted to work from their home in the area of Shinjo-cho (now part of Hiroshima’s Nishi Ward) and was pinned under the wreckage of a barracks. She returned home in the evening, but glass fragments had pierced her face, which was covered in blood, and she was in pain from broken ribs in her chest. She died on September 4 at the age of 36.

Regarding the A-bomb victims serving in the Shichotai unit, Hiroshima Shicho Heitai Shi states that 188 people died and 234 people were missing, and in a separate category, that one civilian employee was missing. Ms. Minasaki should be considered a “dead civilian in military employ,” but there is no such category in the book. The entirety of the picture of damage to Shichotai remains unknown.