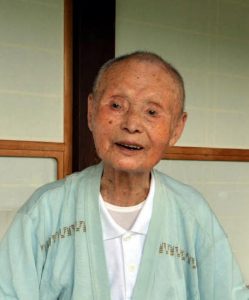 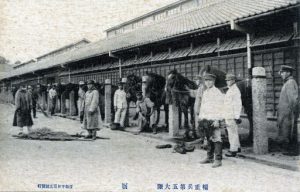 “My memory is hazy now,” said Kazuma Hidani, 98, a resident of the area of Toyosaka-cho in Higashihiroshima City, as he sat down on a sofa on the veranda overlooking a lush mountain range. When asked about the former Japanese Army’s transport unit known as the Chugoku District transport soldier recruitment unit (“Shichotai” in Japanese) in which he served, he was at a loss for words for a moment. “Yes. I actually belonged to the unit. Oh …,” said Mr. Hidani as he let out a sob.

Mr. Hidani was mobilized around 1943 when he was a school teacher, and served in the Shichotai unit for about two years until after the war ended. He was mainly responsible for taking care of military horses. Looking back on those days, he said, “The horses sometimes bit me at first. But eventually, when I went into the stables, they got used to me and started to nuzzle up to me.” He recalls that, even at the time when military horses were valued more than humans, they were “my soul mates.”

On August 6, 1945, Mr. Hidani had been dispatched as an instructor to the drill grounds in Umaki (now part of Hiroshima’s Higashi Ward), where military cadets were trained. He sent out a reconnaissance unit when he saw the sky covered in gigantic clouds over Hiroshima following a flash of light and roaring sound. When he learned that the base in Motomachi (now part of Naka Ward) was in such a state of devastation that it would be difficult to get near, he headed toward the center of the city with medical supplies and food for rescue operations.

Mr. Hidani recorded the scenes and circumstances at that time in a wartime account of his experiences collected by the former Ministry of Health and Welfare in 1995: “It was 4:00 to 5:00 in the afternoon of a mid-summer day, and we were a military procession amidst a shower of flame and sparks. I thought this was what scorched hell must be like. At the site where the unit was located, I ran about frantically searching for anyone who might still be alive, and carried the survivors out while trying to confirm their names.”

The Shichotai unit, located within one kilometer of the hypocenter, is said to have lost more than 400 of its members in the bombing. Some of the wounded who were to be carried to Umaki died one after another as they awaited dawn of the following day. “How many people were ultimately taken to Umaki? Not many,” wrote Mr. Hidani.

In the days after the atomic bombing, the Shichotai unit moved its base to Hiroshima’s present-day Asakita Ward, where it continued winding-up operations through the remaining days of the war and even after the war was over. Although the unit had lost most of its military supplies, according to a personal account left by a senior officer of the unit, seven horses that had been moved to the outskirts of the city did survive. The account indicated that the horses were eventually sold to unit members, who affectionately cared for them and brought them back to their own homes.

Mr. Hidani was one of them. He said, “I brought home a horse named ‘Hollow,’ and often told him how lucky we were to have survived.” After he returned to his hometown of Toyosaka-cho, he returned to his teaching job at an elementary school. Later on, he served as the school’s principal until he retired. He now spends his time at home, visiting a nursing care facility three days a week.

When the Chugoku Shimbun reported to him that the structural remains of the Shichotai unit had been discovered at the planned construction site of a new soccer stadium, he said with humility, “If young people want to use the land as an athletic field, I will respect that. However, part of me would also like to have some portions of it preserved as a place of so many memories for me.”

If it had been a bit earlier

As the Chugoku Shimbun proceeded with reporting on this series of stories, another person from the same transport unit was found to be alive and well. According to his wartime experience account collected by the former Ministry of Health and Welfare, Hiroshi Kuwashige, 96, who had been sent to the drill ground in Umaki as a military cadet, entered the city center for rescue operations in the same way as did Mr. Hidani.

“If contact from the Chugoku Shimbun had been a little earlier, you would have found him living at home,” said his eldest son Kazushige, 68. Mr. Kuwashige is now living in a nearby nursing home. Although visits to the facility are restricted due to the coronavirus pandemic, the facility made special arrangements for Kazushige to ask his father about circumstances surrounding the unit in the days before and after the atomic bombing. However, he was unable to obtain any more information than what was described in his father’s personal account.

At a corner of the structural remains of the Shichotai unit, a monument built during the war to honor the unit’s horses killed during the war has survived the atomic bombing and still stands today. The thirteen members who voluntarily installed an explanatory panel next to the monument in 2007 would now be in their late 90s or older, if still alive. The Chugoku Shimbun confirmed that four of them have died but was unable to reach those who are still alive. Opportunities to hear the actual voices of former unit members are dwindling year by year.