Peace Park VR tour begins; participants learn what Hiroshima was like at time of atomic bombing 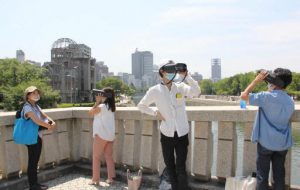 The Peace Park Tour VR began on August 1. Participants tour Hiroshima Peace Memorial Park and use virtual reality (VR) technology to experience what happened to the city when the atomic bomb exploded. The tour has been organized by Tabimachi-Gate Hiroshima, a Hiroshima-based organization working for the revitalization of the local economy, and Peace Culture Village, a nonprofit organization based in the city of Miyoshi. These organizations hope participants will learn the history of the atomic bombing using the latest technology.

Three people took part in the 80-minute tour on August 1. They toured the park with a guide and put on VR goggles at four locations, including the opposite side of the river from the Atomic Bomb Dome. They experienced looking at 360-degree image of how the bustling city center turns into a heap of rubble in the gloom and enveloped in flames or black rain falling over victims walking across Aioi Bridge.

Keita Takagaki, 19, a freshman at Waseda University in Tokyo, participated in the tour as he is back at his parents’ place in Asaminami Ward. “This helps me learn what the city was like at the time of the bombing, as it is not easy to imagine from the present cityscape,” he said.

The daily tour accepts up to six people. For weekday tours, reservations must be made the day before the tour. Tours may be cancelled during any period of intensive countermeasures against the coronavirus as designated by the prefectural government. The tour costs 3,500 yen for those aged 12 and older, and 1,000 for those between the ages of 6 and 11. For further information, call the tourist information desk at the Rest House: 082-247-6738.