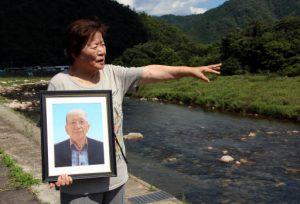 “If the government had made a decision earlier”
by Teru Matsumoto and Daisuke Neishi, Staff Writers

The river’s surface was illuminated by strong sunshine in the area of Tsubono in the town of Akiota-cho in Hiroshima Prefecture, about 20 kilometers from the hypocenter. On July 27, Sawako Nakatsu, 83, stood by the Ota River running in front of her home and spoke to a photograph of her late husband. “Papa, we finally won,” she said.

Seventy-six years ago, Ms. Nakatsu’s husband, Shoshi Nakatsu (who died at age of 81 in 2018) was exposed to “black rain” that fell after the atomic bombing near his home here. Nevertheless, Japan’s national government defined the border of the “area of eligibility to receive relief,” on which heavy rain had fallen, as being on the opposite side of the river across from his home. The river, with a width of only 20 meters, marked the boundary for determination of whether or not support would be provided. Shoshi continued to argue that the river surely could not serve as the rainfall border and joined a group of plaintiffs in the first-ever lawsuit involving black rain in November 2015.

Sawako watched his effort with mixed feelings. In reality, she had also been exposed to black rain near her home in the village of Tsutsuga-mura (now part of Nakatsusuga in the town of Akiota-cho). She did not want anyone to find out what had happened. Keeping it to herself, she married in 1955. While her husband was alive, the couple rarely shared with each other their memories of that day.

Sawako said, “I watched my husband working hard to expand the area for relief when he was alive. After he died, I wanted to relieve him of any remorse.” After Shoshi died of a heart attack, she joined the lawsuit as a plaintiff, taking over his role.

On July 14, the Hiroshima High Court ruled it would uphold the original ruling provided by the Hiroshima District Court recognizing all 84 plaintiffs as being A-bomb survivors. The high court also took a further step forward by handing down its opinion that those who had been exposed to the black rain should broadly be recognized as being A-bomb survivors regardless of specific illness, because of the potential for health effects caused by internal radiation exposure, including inhalation of radioactive particles in the air. On July 26, before the designated period for appeal concluded, Japan’s Prime Minister Yoshihide Suga announced his decision to not appeal the case to the nation’s Supreme Court.

Upon hearing the news, Sawako felt frustration. About six years had passed since the lawsuit was first filed. In the interim, 19 plaintiffs had died, including Shoshi. Moreover, on the day following the ruling by the Hiroshima High Court, Shigeko Tamura, from the town of Fuchu-cho in Hiroshima Prefecture, passed away at the age of 86. Ms. Tamura was exposed to black rain when she was 10 and suffered from chronic renal failure, among other ailments.

“If the national government had made the decision earlier, more people would have been helped,” attorney Shingo Sasai said quietly at a press conference held with the plaintiffs and their legal team in Hiroshima’s centrally located Naka Ward on July 27. Mr. Sasai added forcefully, “The high court’s decision is a new starting point for us. Now we move on to the stage of quickly providing relief to those who are waiting.”

An official prime minister’s statement was approved by the Cabinet in the evening on the same day. It reads, “The government will deliberate promptly on our response going forward to ensure that black rain victims are recognized as being A-bomb survivors—regardless of whether or not they participated in the lawsuit—and receive relief.” The statement clearly mentioned the matter of extending A-bomb survivor recognition to other people besides the plaintiffs.

However, regarding the Hiroshima High Court’s ruling, which moved closer to the issue of health effects caused by internal exposure, the prime minister’s statement also emphasized that, “The government would not accept the opinion, because it is not compatible with the intent of A-bomb survivor relief measures the government has practiced until the present time.” The plaintiffs’ attorneys shot back, “A-bomb survivor recognition won’t be possible unless health effects from internal exposure to black rain are one condition allowing recognition.” In this way, the plaintiffs applied brakes to any backsliding that might happen in the debate on revision of the governmental framework for provision of support to A-bomb survivors.

Pleas made by those who were exposed to black rain for more than 40 years now pave the way for provision of relief to all black rain victims. Such efforts shed fresh light on the spirit of the Atomic Bomb Survivors Relief Law, which stipulates that damage from the atomic bombing was the result of a war waged by the national government and that the victims of such damage should receive support from the perspective of national government compensation. Gazing at Shoshi’s photo, Sawako said, “I hope some of his remorse has been wiped away.”