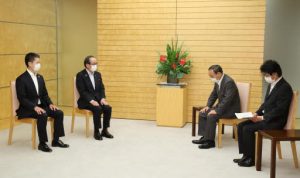 Hiroshima City and Hiroshima Prefectural governments align and stick with their position to back plaintiffs
On July 26, it was announced that Japan’s Prime Minister Yoshihide Suga had come to the decision that his government would not make a final legal appeal to Japan’s Supreme Court regarding the lawsuit over health effects caused by exposure to “black rain” that fell after the atomic bombing of Hiroshima. In contrast to the attitude of Japan’s national government, which pressed the Hiroshima City and the Prefectural governments to make a final appeal during negotiations that lasted during the four-day holiday period from July 22 to 25, the two local governments continued to resist and take the side of the now elderly plaintiffs. The prefecture and city’s direct negotiations with Prime Minister Suga led to the abrupt “political decision,” which brought to fruition pleas made by Hiroshima people for more than 40 years. In this series of articles, the Chugoku Shimbun will look behind the scenes and identify the challenges in achieving this support.

At 4:10 p.m., while staying in Tokyo, Hiroshima City Mayor Kazumi Matsui received a call on his cell phone from Fumio Kishida, former chairperson of the Policy Research Council of the Liberal Democratic Party (LDP) (Hiroshima District No. 1), who conveyed the information that, “The prime minister made the political calculation to give up on the final appeal.” Around the same time, prefectural and city government officials involved in the case were all informed about Mr. Suga’s intent. Around 4:30 p.m., Mr. Suga expressed his decision to the media to not make an appeal to the Supreme Court. At 5:00 p.m., he told Hiroshima Prefectural Governor Hidehiko Yuzaki and Mr. Matsui, who both came to meet him in person. A senior prefectural government official was pleased with the decision but did not hide his surprise. “That was unexpected.”

Following last July’s Hiroshima District Court’s ruling, on July 14 this year, the Hiroshima High Court upheld the original ruling that comprehensively sided with the 84 plaintiffs. According to multiple sources, when the negotiations took place after the ruling was provided, the Ministry of Health, Labour and Welfare (MHLW), Hiroshima City, and Hiroshima Prefecture simply reiterated their assertions to each other and continued to fail to make any compromise.

MHLW officials defied the ruling that anyone whose health might have been affected due to internal exposure to radiation from black rain should be recognized as being an A-bomb survivor and maintained a stern attitude about that issue. “The ruling isn’t acceptable,” they said. On July 20, Health, Labour and Welfare Minister Norihisa Tamura touched on internal exposure at a press conference. Regarding the intent behind Mr. Tamura’s comment, one view held that MHLW was concerned about the impact the decision from the black rain case might have on views of radiation damage caused in the Tokyo Electric Power Company’s Fukushima No. 1 (Daiichi) nuclear power plant accident.

The prefectural and city governments never gave in, however. After the high court’s ruling was rendered, Hiroshima Mayor Matsui announced to the Diet members of both ruling and opposition parties that he would recognize all the plaintiffs as A-bomb survivors and issue them Atomic Bomb Survivor's Certificates, revealing that the city and prefecture would not meet the national government’s request that they make a legal appeal to the Supreme Court. At that point, the city and the prefecture were aligned. As an idea to ease the national government’s concern about internal exposure to radiation, they began to employ the logical argument that the high court ruling had used the wording “A-bomb radiation,” which could be interpreted as limiting the scope of the ruling to A-bomb-related cases.

The local governments’ stance was underpinned by their strong dissatisfaction with the national government’s handling of the case, which failed to lead the way for expanding the area (heavy rain area) of eligibility to receive relief. When the original ruling was provided by the Hiroshima District Court, the government announced it would conduct a review by taking expansion of the area into consideration, and with that, the Hiroshima Prefectural and City governments agreed to appeal the case to the High Court. However, even after one year has passed, no clear direction has become apparent. A senior city official said with conviction, “At the first ruling, we took an approach of bargaining with the national government, but we are not going to compromise this time.”

On July 23, senior officials at MHLW and Japan’s Ministry of Justice visited Hiroshima City Hall. They negotiated directly in an irregular meeting with Hiroshima’s Deputy Governor Masahiko Tanabe and the city’s Deputy Mayor Nobuyuki Koike on the matter, but no conclusion ultimately resulted.

Multiple sources conveyed the information that the prefectural government sought the option whereby Mr. Yuzaki and Mr. Matsui would have direct negotiations with Prime Minister Suga as a measure to break the deadlock. There was a possibility that such negotiations might not be achieved if any information about the process were leaked, and therefore a gag order was issued to insiders at the prefectural and city governments.

A meeting was confirmed to be held at the prime minister’s office in the evening of July 26, the day after the four-day holiday period. While working at their offices during the holidays for coordination with the central government and to prepare for a Q&A session to be held after the meeting with the prime minister, officials in the Hiroshima Prefectural and City governments came gradually to have some hope about the situation, based on their expectation that the political decision of giving up a final appeal might be made, given the prime minister’s intent to meet with the governor and the mayor in person.

Local Hiroshima Diet members also started to act. Fumio Kishida, former chairperson of LDP’s Policy Research Council, urged Chief Cabinet Secretary Katsunobu Kato (Okayama District No. 5), Health, Labour and Welfare Minister Norihisa Tamura, and other senior officials at the ministry not to appeal to the Supreme Court. Their arguments: “We need to deliver a political message prior to August 6,” and “You shouldn’t underestimate the people of Hiroshima.” Tetsuo Sato, vice representative of Komeito (Chugoku proportional representation block), also made a direct phone call to Mr. Suga.

Behind Mr. Suga’s sudden political decision, some in the political community of Hiroshima Prefecture speculate he was hoping to increase the approval rating of the Cabinet, which is on the sharp decline, prior to the upcoming elections for Lower House seats to be held sometime this year. Others say that the prime minister may have been affected by the harsh looks sent his way by Hiroshima Prefecture’s political community, regarding his involvement in the large-scale vote-buying scandal that happened in Hiroshima voting districts in July 2019, at the time of Upper House elections.

A senior city government official summarized the political decision this time. “There might have been some background information that people are talking about. However, the prime minister not only gave up the final appeal but also talked about providing aid to non-plaintiffs who were also exposed to black rain. It was the best result we could have imagined.”