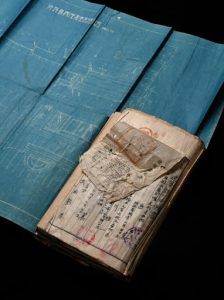 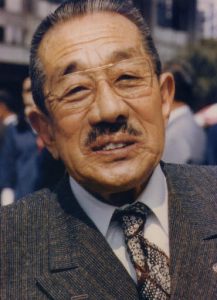 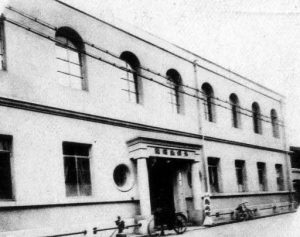 
Refurbished into modern building before open
Seven sections of a blueprint made in 1933, before the opening of the Shima Hospital (now Shima Surgical and Internal Medicine Hospital, in Hiroshima’s Naka Ward) have been discovered. The hospital building, known as being at the “hypocenter” of the atomic bombing, originally served as the Telephone Exchange Branch of the Hiroshima Post Office. The blueprint provides detailed information on how the building was remodeled into a surgical hospital. With few records about the hospital before it was destroyed by fire in the atomic bombing, the drawing is considered a precious primary information source.

The blueprint, titled “Shima Surgical Hospital remodeling plan,” measures 53 centimeters by 75 centimeters. The drawing, dated April 22, 1933, was attached to an application submitted for approval of the building’s construction to the Hiroshima Prefectural government by Kaoru Shima, who died at the age of 79 in 1977.

The drawing shows that Dr. Shima had learned advanced medical techniques by studying in Germany and training in the United States. It also shows how the structure was renovated into a modern building, with drawings of the two-story U-shaped building and a courtyard located in the middle. On the first floor, there appear to be a dispensary, a medical staff room, and an X-ray room. There were functional toilet facilities and a kitchen. The second floor had 18 patients’ rooms, a recreation room, and a nurse station.

Written on the blueprint in Dr. Shima’s firm handwriting is the following: “A corridor will run through the middle, with a medical staff room and a dispensary on each side.” The drawing hints at the ambition of the 35-year-old physician with regard to the opening of his hospital.

Approval from the prefectural government for construction was granted on May 30, 1933. After a three-month renovation period, the hospital opened on August 31. A curator at the Hiroshima Peace Memorial Museum said about the blueprint discovery, “This is the first time I have seen records related to the renovation of the Shima Hospital building. Since no other blueprints of buildings around the hypocenter exist, the drawing is of paramount importance.”

The drawing was discovered by Naoko Shima, 78, wife of Kazuhide Shima, 86, Kaoru’s oldest son who took over his father’s hospital as a physician. Mr. Shima found it this past spring when she was cleaning up the Shima family storehouse in Hiroshima’s Aki Ward. The storehouse also housed a blueprint of the Telephone Exchange Branch of the Hiroshima Post Office before it was remodeled into the hospital, a map of the neighborhood of Saiku-machi (now part of the city’s Naka Ward) and its surroundings, as well as documents created after the war.

On August 6, 76 years ago, the atomic bomb dropped by the U.S. military detonated about 600 meters above the hospital. Dr. Shima escaped harm because he had left Hiroshima the day before to perform surgery in the area of Kozan-cho (now part of the town of Sera). However, about 80 people, including on-duty physicians, nurses, and inpatients, were killed in the bombing.