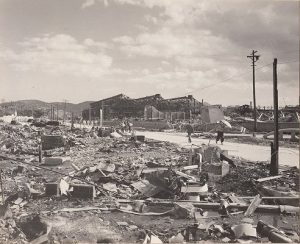 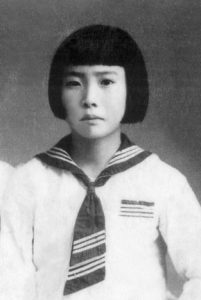 Commemorating A-bombing day in Nagasaki
Cinders gathered in the ruins were the remains of her favorite cousin.
Moved from Nagasaki to Hiroshima. Had a guilty conscience and worried over her eldest daughter’s onset of disease
by Rina Yuasa, Staff Writer

Motoko Okinishi (née Inuzuka), 86, experienced the atomic bombing in Nagasaki when she was ten, and now lives in Hiroshima. Having a special feeling on the dates of August 6 and 9 every year, she has spent her life in the two A-bombed cities.

Ms. Okinishi was born in Dalian, China. Her father had crossed the sea from the Goto Islands, a remote island area in Nagasaki, to the former Manchuria (in northeastern China), and ran a bookshop. When she was one year old, her mother died. After that, her aunt Mitsu Inuzuka, then 53, raised her as a foster mother. In 1944, they moved to Nagasaki together. She lived there with five relatives, including Chuzo Takamura, her cousin.

In 1945, Chuzo was 17 years old and a first-year student at Nagasaki Specialized School of Industrial Management (present-day Nagasaki University). Beginning August 1, he was mobilized to work at the Mitsubishi Nagasaki Arms Factory’s Morimachi Plant for producing torpedoes. Ms. Okinishi admired Chuzo as if a brother, and saw him off to work every morning.

On August 8, Matsusaburo Takamura, Chuzo’s father who was then 51, and others came from the Goto Islands to bring fish and rice. That night, Ms. Okinishi and a boy in the neighborhood slept in an air-raid shelter in preparation for air raids. By that time, people in Nagasaki already heard the news that a new-type bomb had been dropped in Hiroshima.

Around 11 a.m. on August 9, she made a fire in a clay charcoal stove to prepare lunch. She heard the sound of an airplane from the direction of the mountain behind her home. She rushed into the house, and at the same time there was a bluish white flash and a blast sound. Her home was located about four kilometers away from the hypocenter. The window glass in her home and in the garden greenhouse were left shattered. Houses located on the bottom of the hill collapsed, and fires broke out in many places.

Beginning the next day, Matsusaburo and others looked for Chuzo, but they found that the factory where he worked, which was located about 1.4 kilometers from the hypocenter, had all turned into ruins except for its steel frame. Three days later, they placed ash from the site into a pot and brought it home. That night, everyone in her home surrounded the pot and cried together. Ms. Okinishi said, “He was like a kind brother to me, who had secretly given me sweets. Tears still well up in my eyes when I think of him.”

Ms. Okinishi also searched for her elder sister Reiko Inuzuka, who was then 17 and lived at Zenza-cho, in the central area of Nagasaki. When she waited for the rain to stop at Togiya National School (now Suwa Elementery School), she saw a leg from a dead body, which had been cremated in front of her, had burnt down and fallen from the body. A woman who looked like a member of the deceased’s family shouted, “Pick up the leg.” Later, she was able to meet Reiko, who had survived the bombing. She cannot forget how happy she was at that time.

In 1949, years after the war had ended, her house was bought by Nagasaki Prefectural government, as the government wanted to use it as government-owned housing for the U.S. military. So, now counting on her uncle for help who lived in in Hiroshima, she moved to a place very close to the A-bomb dome. In 1960, she married Teruo Okinishi and gave birth to two children.

She never talked about her atomic bombing experience with her family. But she was faced with the harsh reality in 2008, as her eldest daughter Keiko Okinishi, 56, a violist, was diagnosed with thyroid cancer. She blamed herself and thought her daughter suffered from cancer because she was an A-bomb survivor, or because she drank contaminated persimmon leaves in the garden as a decoction, having been told the leaves would prevent her from developing A-bomb disease. Two of her relatives, who were the second-generation A-bomb survivors, died of leukemia and cancer, too. She was tormented by remorse and worry.

The person who encouraged her most was Keiko, who began to learn about the atomic bombing on her own, and eventually went through three medical operations. Because of Keiko’s strong influence, her recounting of her A-bomb experience was collected by the staff of Nagasaki National Peace Memorial Hall for Atomic Bomb Victims. With them, she shared her experience in detail for the first time.

Keiko is now serving both as one of the “A-bomb Legacy Successors” or “memory keepers” developed by the City of Hiroshima, and as a witness as a survivor’s family member in Nagasaki city. Ms. Okinishi said, “The atomic bomb and nuclear arms are weapons which take loved ones away from each of us. I would like young people to understand that.” She now leaves the realization of her wish to her daughter. Remembering her favorite cousin, Chuzo, she still puts grilled eggplant, his favorite dish, as an offering at the family’s Buddhist altars.