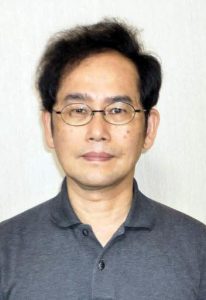 The history museum at Hiroshima Jogakuin University, located in the city’s Higashi Ward, has in its archives a violin that survived the atomic bombing. The violin belonged to Sergei Palchikoff (1893–1969), a music teacher at the school who was from Russia. Exposed to the atomic bombing in the area of Ushita, also in Hiroshima’s Higashi Ward, the violin was later taken to the United States. In 1986, Mr. Palchikoff’s daughter, Kaleria, visited Hiroshima and donated the violin to the museum.

I began my involvement in the HOPE Project, a civic group, in 2018. The group is known for its archiving of a piano that once belonged to Akiko Kawamoto, a girl student who died in Hiroshima in the atomic bombing. The following year, the HOPE Project cooperated in the holding of the concerts “Akiko’s Piano” and “Mr. Palchikoff’s Violin” on boat cruises operated by the Peace Boat, a nongovernmental organization (NGO). I decided to begin collecting materials on the Palchikoff family to prepare background information for introducing the violin to the public.

I was only able to glean partial information from such sources as Hiroshima Jogakuin University, newspaper articles, references on research into White Russian A-bomb survivors, and materials written by Takashi Ishii, the specialist who repaired the violin. Later, relying on English websites on the internet, I found Kaleria’s account of the atomic bombing and discovered accounts written by Sergei’s oldest son, Nicolay, and Nicolay’s daughter, Kim. The more I learned about the family, the more I became astonished by, and absorbed in, the family’s eventful history.

Last year, Tony Drago, Kaleria’s son, published Surviving Hiroshima, a publication that captures the history of the family. Based on that book and my own research until this point in time, I hope to tell the story of the Palchikoffs.