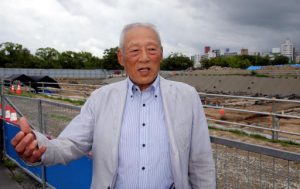 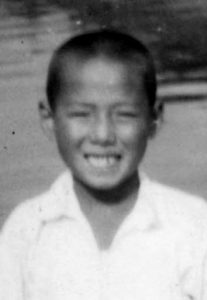 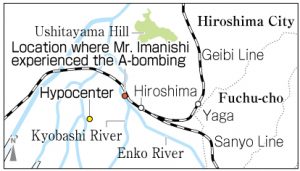 My classmates teased me for the keloid scars but soccer helped me surmount hardship
by Miho Kuwajima, Staff Writer

Kazuo Imanishi, 80, served as a general manager of Sanfrecce Hiroshima, a Hiroshima-based professional soccer team, in its early days. He was four years old when he experienced the atomic bombing. His left leg was burnt by the bomb’s heat rays and its skin has shrunk due to keloid scars. However, he used adversity as a springboard, making a spectacular showing as a soccer player. He also devoted himself to train the younger generation and to liven up local sports.

He was born and raised in Hiratsuka-cho (now Higashi-hiratsuka-cho in Hiroshima’s Naka Ward) as the youngest of four children. In April 1945, the family moved to Futaba-no-sato, a town close to Hiroshima Station because their house was in an area subject to building demolition to create firebreaks in case of an air raid. At the time, cities across Japan were suffering heavy bombardment by the U.S. military.

On that morning, August 6, 1945, he was sitting at an upstairs window in his house, about 1.6 kilometers from the hypocenter, swinging his legs and having squabble with a girl in the neighborhood. Suddenly, there was a flash of light, and he found himself stuck under the roof of the house which had fallen down with a thud.

He was dragged out of the rubble by his mother, Kinuko (who died in 1990 at the age of 83). She put him on her back and headed for an air-raid shelter in Ushitayama Hill. He saw people running about trying to escape, and yelled, “Mom, that person is bleeding.” Then, she admonished him, “You, too, are bleeding. Stop talking. Just stay on my back.” He burst out crying.

The river, on which bodies were floating, was full of people trying to drink water. “I hardly remember that time when I was four or five years old, but I will never be able to forget that sight.” They spent the night in the air-raid shelter, which was packed with wounded people.

The next day, they took refuge in their relative’s place in Yaga (now part of Higashi Ward). Mr. Imanishi’s head, arms and legs were badly burnt. His burn scars gradually oozed, which flies swarmed upon, and became infested with maggots. “I screamed in pain when I had someone pick off the maggots with tweezers.”

A few days later, Mr. Imanishi’s eldest sister, Hisae, then 16, was carried back by a two-wheeled handcart from the place where she had been mobilized. She later become the grandmother of Dai Tamesue, 43, a former track-and-field athlete. Her face and arms were severely burnt, but she got better little by little.

In the spring of 1952, when he was in the third term in fourth grade, the family moved back to Hiratsuka-cho, which faced what is now Peace Boulevard. It was covered by weeds and dotted with barracks at the time. Students at Takeya Elementary School, which he had transferred to, teased him for the keloid scars on his arms and legs. “Now that I think of it, it was bullying. But the humiliating and bitter experience made me become a person who can consider others,” he says, remembering this time.

Occasionally, a jeep came to the school to pick him up to take to the Atomic Bomb Casualty Commission (ABCC, now Radiation Effects Research Foundation) located on Hijiyama Hill, where they took pictures of him naked. “Even as a child, I was very angry.” His teacher told him, “they are studying the effects of the atomic bomb on human bodies.”

He entered Funairi High School after finishing Kokutaiji Junior High School, and joined the judo club. However, he was highly valued as a fast runner despite tightened skin due to keloid scars, and moved to the soccer club when he was in the second year—a major turning point for him. He continued playing soccer after he went to Tokyo University of Education (now University of Tsukuba) and joined Toyo Kogyo (now Mazda Motor Corporation) in 1963.

Later, he was discovered by Ken Naganuma (who died in 2008 at the age of 77), who served as President of the Japan Football Association, and selected as a member of the Japan national soccer team in 1966. Mr. Naganuma, a graduate of the junior high school affiliated with the Hiroshima Higher Normal School (now Hiroshima University Junior and Senior School), was also an A-bomb survivor. He revealed to Mr. Imanishi, “I want the ruined city of Hiroshima to regain its vibrancy.”

Mr. Imanishi felt the same way as Mr. Naganuma did. After retiring as a player in 1969, he supported the local soccer world as a coach. He became general manager of Sanfrecce Hiroshima when the Japan Professional Football League started in 1993. He has developed a number of leading players, including Hajime Moriyasu, 52, head coach for the Japan national team which is currently taking part in Tokyo Olympic Games.

While doing his main work, he served as president of his alma mater’s alumni association for a total of 10 years from 1985 to 2009. Hiroshima First Municipal Girls’ School, the predecessor of Funairi High School, lost its 676 students and teachers in the atomic bombing. “Innocent girls around the age of 13 were killed. I’m not the only victim. I must spread the word about the girls to future generations,” he strongly felt when he found out.

Mr. Imanishi also got involved in a project set up in 2003 to promote construction of a new soccer stadium. The construction plan is under way at the city’s Central Park (Naka Ward) by the Hiroshima City government. “Sanfrecce Hiroshima has been supported by people of Hiroshima just as Hiroshima Toyo Carp, a Hiroshima-based professional baseball team, has been. I hope the new stadium will become a place for many people to feel the reconstruction of Hiroshima,” he said.