Striving to fill voids in Hiroshima, evidence of victims remains 76 years after the atomic bombing—Hospital director writes of regrets about 80 A-bombing deaths 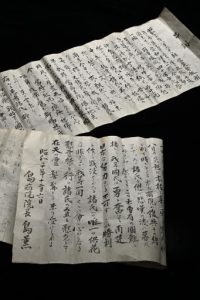 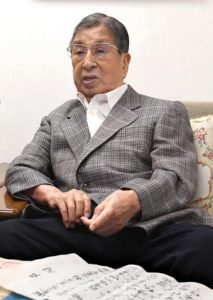 “As far as the eye could see, the city had been turned into a pile of dirt. Who could look at that catastrophe without shedding tears?,” wrote the late Kaoru Shima, then director of the Shima Hospital (now Shima Surgical and Internal Medicine Hospital, in Hiroshima’s Naka Ward), located at the hypocenter. The words appeared in a condolence message he read at a memorial service for A-bomb victims at his hospital four months after the U.S. military dropped the atomic bomb. The message, which remains to this day, ardently describes Mr. Shima’s grief about losing about 80 people, including doctors and nurses, in the bombing.

Mr. Shima’s message was among the materials discovered at the Shima family storehouse in Hiroshima’s Aki Ward this past spring, along with a blueprint of the hospital’s original building as of its opening in 1933. The message was written with a brush on Japanese paper measuring about 184 centimeters in length and about 28.5 centimeters in width. At the end of the message appears the date December 6, 1945.

“Because our hospital was located at the hypocenter, I assumed every living soul in the hospital instantly returned to heaven at the moment of the A-bomb detonation.” Naoko Shima, 78, wife of Kazuhide Shima, 86, Kaoru’s oldest son, said, “Someone must have dictated the message on the paper with a brush as my father-in-law spoke. It reflects his feelings well.” Ms. Shima was able to discern Kaoru’s despair, about which he never spoke while alive.

Informed of Hiroshima’s annihilation when he was in the area of Kozan-cho (now part of the town of Sera in Hiroshima Prefecture) on business, Kaoru aimed to hurry back to the center of Hiroshima. “And, oh, I found the whole city engulfed in flames, a miserable situation that was beyond description,” he wrote. While providing relief to victims at Fukuromachi National School (now Fukuromachi Elementary School), he searched for his hospital staff members, as well as his younger sister and her husband, who had been operating a pediatric hospital in the neighborhood. He also considered the deaths of his patients, as can be seen in the statement, “Standing in the middle of smoldering remains with a belief that they must be alive, I called out their names several times, but no one replied.”

Kazuhide said, “Such statements represent my father’s personality well. I think my father agonized over the fact that he was the only survivor, and he shouldered that burden for the rest of his life.” At the time, Kazuhide was 10 years old and a fifth-grade student at the national school affiliated with Hiroshima Higher Normal School (now Hiroshima University Attached Elementary School). He had been evacuated with other school children to the town of Saijo-cho (now part of Shobara City, Hiroshima Prefecture). In Kazuhide’s early memories, his father was always wearing a surgical suit and working hard. After the war ended, Kaoru and his colleagues at the Hiroshima surgical society declared that they would treat the aftereffects from the bombing experienced by the A-bomb sufferers free of charge if requested and worked to assist the A-bomb survivors at an earlier time than relief arrived from the Japanese national government.

Kazuhide followed in the footsteps of his father and became a surgeon. When Kaoru died in 1977, Kazuhide took over management of his father’s hospital at the hypocenter. For many years, he would invite students on school trips to the director’s room and talk about the A-bomb destruction the Shima Hospital had suffered, as well as the memories of his evacuation to a rural area as a schoolchild. However, since undergoing surgery for scoliosis six years ago, he has stopped giving such testimonies and offering consultation to patients. Leaving hospital management to Hideyuki Shima, 49, his oldest son and also a physician, Kazuhide continues with his rehabilitation.

At the end of the condolence message, Kaoru’s determination to look ahead amid his grief is described. “Facing this unprecedented national crisis, we must gather our courage and make efforts to restore Japan as Japanese citizens.” Since 1946, the memorial service has been held every year on August 6, with the Shima family conducting its own Buddhist service in recent years. Tomorrow, August 6, the hospital will quietly mourn all the victims who died at the hypocenter in this year’s memorial service on the 76th anniversary of the atomic bombing.