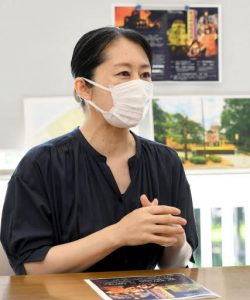 On September 29, the executive committee in charge of holding a bonfire-lit Noh performance at the A-bombing hypocenter to commemorate the victims on November 15 outside the Atomic Bomb Dome, located in Hiroshima’s Naka Ward, held a press conference in the city. Kinue Oshima, 47, one of the Noh Kita-ryu performers scheduled to appear the day of the event, clearly conveyed her enthusiasm at the media conference.

Masaaki Tanabe, 83, whose home was once located to the east of the Hiroshima Prefectural Industrial Promotional Hall, the predecessor to the A-bomb Dome, was the person responsible for planning the bonfire-lit Noh performance to commemorate the victims. On the day of the performance, a one-day Noh stage will be set up on the south side of the A-bomb Dome, with bonfires lit in two locations. Teruhisa Oshima, 45, the fifth-generation head of the Oshima family, and Kinue Oshima will perform “Takasago” and “Hagoromo,” respectively, which are representative plays of Noh theater. “Both plays are infused with prayers for people’s happiness and peace. I hope to perform in a way that will leave a lasting impression on the audience,” Kinue said with confidence.

The November 15 performance will be livestreamed on YouTube beginning at 6:00 p.m. with no live audience in attendance. In the interval between the two plays, a video will be shown to introduce Hiroshima’s history and present. A venue will be set up for visitors to view the video feed at the Rest House, a building in Hiroshima Peace Memorial Park that survived the atomic bombing.