Toward opening of doors in spring next year, Hiroshima City begins construction on facilities in Peace Memorial Park for exhibit of A-bombed structural remains 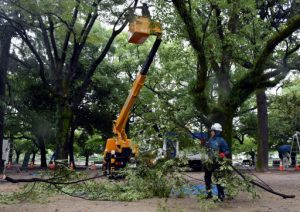 On September 2, the Hiroshima City government began preparations for the construction of facilities to exhibit A-bombed structural remains from the former Nakajima district, which was devastated in the U.S. atomic bombing and now makes up part of Hiroshima Peace Memorial Park, in the city’s Naka Ward. The facilities, set to be completed and open to the public in March 2022, are designed to communicate to visitors the appearance of the district prior to the atomic bombing as well as the bombing’s devastating consequences for the area.

According to the city’s plan, a one-story building measuring approximately 80-square meters will be constructed in a green zone to the north of the Peace Memorial Museum’s east building. The facilities’ exhibits will include an actual earthen wall of a burned-down building and a replica of carbonized tatami mats, both of which were uncovered in excavation work that took place in 2019. On the same day, September 2, construction workers engaged in removal of branches in preparation for the cutting down of two trees on the planned site of construction.

The city initially aimed to open the facilities to the public in fiscal 2020, as part of a project marking the 75th anniversary of the atomic bombing. With the coronavirus pandemic, however, the plan was put on hold. In its initial budget for fiscal 2021, the city earmarked approximately 129 million yen for construction of the facilities. Ayumi Inada, head of the city’s A-bomb Experience Preservation Division, said, “I hope the exhibit of A-bombed structural remains will convey the tragedy wrought by the atomic bombing, which took away the everyday lives of the people of the Nakajima district.”