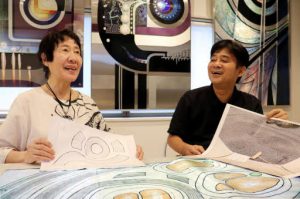 A video composed at 12 different locations in the United States with dry landscape Japanese gardens of the creation with rakes of samon ripple patterns in sand designed by Toshiko Tanaka, 82, an A-bomb survivor living in Hiroshima’s Higashi Ward, is scheduled for online release on September 21, the International Day of Peace established by the United Nations. Last year, the event took place as a voluntary initiative based on the participation of five gardens located in the United States. This year, however, the event has developed into the inaugural year of the Gardens for Peace (G4P) project, which is organized by the North American Japanese Garden Association (NAJGA) based in the U.S. city of Portland, Oregon.

Gardens located in nine U.S. states, including the Harn Museum of Art at the University of Florida and the Fort Worth Botanic Garden in the U.S. state of Texas, have joined the G4P project. In total, 14 sites are participating in the project, including two without dry landscape gardens, such as the Manzanar National Historic Site in California, the location of a concentration camp established during World War II in which people of Japanese descent were held.

It all started two years ago, when Martin McKellar, 71, an Asian garden specialist at the Harn Museum of Art, contacted the Chugoku Shimbun’s Hiroshima Peace Media Center to seek advice about his wish to express ideas about peace. Mr. McKellar was connected to Ms. Tanaka, a wall cloisonné enamel artist, and asked her to create the design of sand patterns employing images of peace. Ms. Tanaka designed several patterns depicting the Japanese word for “heiwa” (peace, in English), which consists of three letters in hiragana script “he-i-wa” (with “wa” described in a round shape in her designs, as the word also means circle). Her friend Takeo Nakaoku, 60, a staff member at the Hiroshima YMCA in the city’s Naka Ward, filmed Ms. Tanaka working on the designs and shared the video with the U.S. counterparts.

Ms. Tanaka has shared her A-bombing experiences of suffering burns and losing friends at the age of six in the atomic bombing. Regarding the spread of peace-related events in the United States, she appeared pleased. “The desire for peace is something everyone holds in common. I hope this event will continue into the future even when A-bomb survivors are no longer alive.” Marisa Rodriguez, NAJGA director, said she hopes to work with other facilities in Hiroshima, Japan, and Europe that have Japanese-style gardens and teahouses to make sure they can join the project next year.

NAJGA will begin streaming the G4P video (English only) at 2:00 a.m. Japan time on September 22 at the following link: https://najga.org/gardensforpeace2021/