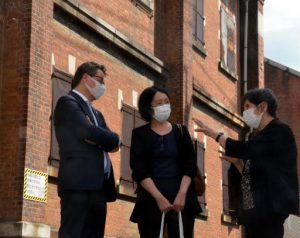 On October 6, Regis Savioz, 54, Head of Delegation in Japan for the International Committee of the Red Cross (ICRC), visited Hiroshima City and had the occasion to interact with Chieko Kiriake, 91, an A-bomb survivor living in Hiroshima’s Asaminami Ward. Mr. Savioz and Ms. Kiriake together visited the former Army Clothing Depot, located in Hiroshima’s Minami Ward and makes up the largest set of A-bombed buildings in the city. Mr. Savioz listened to Ms. Kiriake’s narratives, including her description of the horrific conditions in the depot buildings, which were utilized as a first-aid station after the atomic bombing. As leader in Japan of the ICRC, an organization engaged in such work as conflict resolution and peace building, Mr. Savioz renewed his resolve to work for the elimination of nuclear weapons.

Together with Ms. Kiriake, Mr. Savioz toured the former Army Clothing Depot, which still stores iron doors deformed by the bomb’s blast, following which they sat down to a conversation at a local café, in Hiroshima’s Naka Ward. He listened attentively to Ms. Kiriake’s descriptions of the misery she witnessed after the atomic bombing, such as the scenes at the Clothing Depot, the buildings of which were used as shelter for the injured even as piles of corpses were being cremated; the dead bodies filling the nearby river; and the children that had been separated from their mothers amid the chaos. To listen to all of Ms. Kiriake’s stories, Mr. Savioz delayed his return to Tokyo on this day by about 90 minutes.

Ms. Kiriake also spoke about Dr. Marcel Junod, ICRC’s chief representative to Japan at the time of the atomic bombing who had brought about 15 tons of medical supplies to Hiroshima in September 1945. Around that time, Ms. Kiriake was bedridden with acute symptoms of radiation exposure, including hair loss and bloody intestinal discharge. She mentioned how her mother gave her a medicine she had obtained based on information about how “a foreigner was giving out medication.” Recalling the memory, she explained, “I assume it was the medicine Dr. Junod brought with him.”

For his part, Mr. Savioz pointed out that the risk of nuclear weapons use had increased due to aggravation of the international situation, even with the entry into force of the Treaty on the Prohibition of Nuclear Weapons (TPNW). “Reduction in the number of people suffering due to war is ICRC’s founding principle, and listening to Ms. Kiriake, people would surely understand that no one should possess nuclear weapons.”

The visit by Mr. Savioz to Hiroshima City coincided with a lecture he was scheduled to give at Hiroshima University, located in Higashihiroshima City, where he holds the post of visiting professor. He also had a meeting with Hiroshima Mayor Kazumi Matsui, upon which the two confirmed their cooperation toward the goal of the elimination of nuclear weapons.