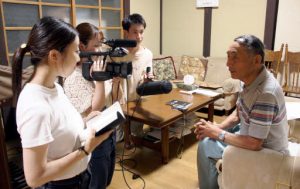 Three students at the Hiroshima University of Economics are working on a documentary about residents in the town of Yuki-cho in Saeki Ward, Hiroshima City, who were exposed to the “black rain” that fell in the aftermath of the atomic bombing. While creating the film, the students, who said they previously knew little about the black rain issue, had the opportunity to listen about how the residents suffered for years because they were excluded from government support for A-bomb survivors, despite their health issues from internal exposure to radiation from the black rain. The students are hoping their “work will give younger generations the opportunity to more carefully consider war and the atomic bombings, events they might feel took place far back in time.”

Majoring in media business, the students are all in their junior year of school. The documentary is being directed by Marika Nishino, 20, Hatsukaichi City, and filmed by two camera operators, Meiko Okuhara, 20, and Naoto Kajioka, 21, both of Hiroshima’s Asaminami Ward.

After learning about the black rain court case in class and from media reports, the students were shocked to learn that some people exposed to the black rain have not received recognition as A-bomb survivors, because of a simple line demarcating what is thought to have been the area on which the black rain fell. Doubts held by the students about such an unreasonable national policy motivated them to create the documentary.

In an attempt to uncover the reality of the situation by compiling accounts of the black rain, the students started to interview members of the court case plaintiff group earlier this year, in February. Filming was conducted mainly in Yuki-cho, through which passes the Minochigawa River, the boundary used to divide the heavy rain area from the light rain area. The students visited Masaaki Takano, 83, the black rain case’s lead plaintiff, more than 10 times to fully grasp his story.

At the time of the bombing, Mr. Takano was caught in rain on the way home from a national school and subsequently developed a high fever and diarrhea. In later years, he contracted cancer and cataracts. He explains in the film that his town back then was called “the village of short lives,” with a crematorium that operated at full capacity. “Still, we were not recognized as being A-bomb survivors and even suffered verbal abuse,” Mr. Takano said bitterly.

Several interviews conducted with other members of the plaintiff group revealed their many years of agony from illness and discrimination. When the Hiroshima High Court ruled in favor of the black rain plaintiffs in July, the camera documented their delight when they realized they would finally be recognized as A-bomb survivors after 76 long years.

More than 120 hours of footage is to be compiled into the 20-minute documentary, which the students aim to submit to a national competition, scheduled to take place in November. “Many of the victims and our grandparents, now in their 80s, are roughly of the same generation. In making the documentary, we felt we were able to get a look at the war up close,” said the students. “It was sometimes difficult to elicit their true feelings, but we wanted to pass on their memories by listening to their stories and documenting their reality.”