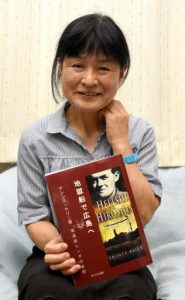 Memoirs written by a British man captured by the Japanese military on Java, an island in Indonesia, have been translated and published by the citizens group “Onomichi Aka Renga no Kai” (Onomichi Red Brick Club, in English). The publication contains explanations about the author’s experience in an air raid while in a prisoner-of-war camp located on Innoshima Island in Onomichi City, Hiroshima Prefecture, on July 28, 1945. The citizens group, based in Onomichi City, continues to interact with former POWs and related individuals. The memoirs include descriptions of the writer’s everyday life and work in the camp over a period of nearly three years, details of how he escaped the air raid, and his perceptions about the August 6, 1945, atomic bombing of Hiroshima.

The memoirs, titled By Hellship to Hiroshima, were authored by Terence Kelly, a Liverpool native who died at the age of 93 in 2013. It took four weeks by transport ship for Mr. Kelly to arrive at Innoshima Island from Java. He wrote that hygiene on board the ship was poor, with numerous prisoners dying one after another from persistent diarrhea. He added that the corpses of such prisoners were disposed of in the ocean.

About 200 prisoners, including those transported from Hong Kong, lived in the POW camp on Innoshima Island. Their labor involved the repair of ships at the former Hitachi Shipbuilding Yard on the island. Mr. Kelly worked as a porter in work such as the repair and transport of ties for crane tracks. Some prisoners continued to work while weak from illness and died.

The air raid began abruptly as prisoners were at work. Mr. Kelly vividly described the experience in his book: “ ... the shriek of aircraft engines, the rattle of machine guns, the thudding of cannons ... a minor panic ensued with prisoners and Japanese alike running to get outside.”

In 1998, Mr. Kelly visited Hiroshima as a member of a delegation from the United Kingdom. While he recognized the horrific reality of the city’s destruction and its citizens being killed in the atomic bombing, he expressed his opinion that “ ... the bomb ... had unquestionably saved the lives of millions ... .” He also wrote about reconciliation with Japan: “But for one who has been a Japanese prisoner of war it is not so simple.”

The book was translated by four members of the Onomichi Red Brick Club. One, Naoko Mizobuchi, 56, who served as Mr. Kelly's guide during his visit to Japan, hopes that the Japanese version of the book will raise awareness that POWs once lived on the island and help readers to foster mutual understanding with people from other countries. Mitsuo Minamizawa, 79, leader of the translation team, said, “I hope the book is read by young people and provides them an opportunity to think about war from an impartial perspective.”

The B5-sized book contains 262 pages and is priced at 2,200 yen. It is available online through Amazon.