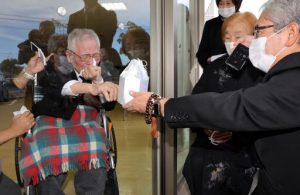 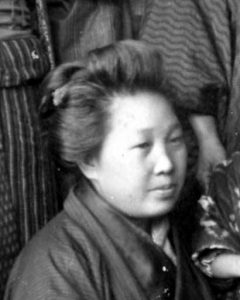 Among victims whose remains are stored in the Atomic Bomb Memorial Mound, one has been identified as Haru Kajiyama (family name 梶山, in Japanese) by the Hiroshima City government. Her remains were returned to relatives, including her grandson, Taketo Kajiyama, 85, a resident of Hiroshima’s Saeki Ward, on October 24. Finally, 76 years after the atomic bombing, the A-bomb victim’s remains were “reunited” with her family.

The city government usually returns remains to victims’ relatives in front of the memorial mound in Hiroshima Peace Memorial Park, located in the city’s Naka Ward. Considering Taketo’s health, however, officials at the city’s Atomic Bomb Survivors Relief Department visited Taketo at a special nursing home for the aged. Minoru Hataguchi, 75, president of the Hiroshima Society for Praying for the War Victims, which manages the memorial mound, handed over a container with Haru’s remains to Taketo’s son, Shuji Kajiyama, 56, a resident of Ibaraki City, Osaka Prefecture.

As a preventive measure against the coronavirus, Taketo remained in the nursing facility and watched the exchange of the remains through a window. He reached out and moved his hand as if to caress the container. Through tears, he said, “She’s finally home. I feel like a great weight has been lifted from my chest.”

Shuji and the other family members then paid a visit to the Hiroshima Peace Memorial Museum to donate Haru’s hair and hair clip, which had been kept inside the container, as well as some belongings of Hatsue Kajiyama, Taketo’s sister who was four years his senior and killed in the atomic bombing. They placed Haru’s remains in the Kajiyama family grave located in Etajima City, on Etajima Island in the Seto Inland Sea.

The remains were identified through reporting conducted by the Chugoku Shimbun. Taketo’s mother, Takiko, who was Haru’s daughter-in-law, had registered Haru’s name and photograph with the Hiroshima National Peace Memorial Hall for the Atomic Bomb Victims. Comparing the information with that of victims registered at the memorial mound, a reporter found a name with different Chinese characters (鍛冶山, in Japanese) but the same pronunciation and matching address of Hiroshima Minami-machi 3-chome. The reporter contacted Taketo in January of 2020, and Shuji, Taketo’s son, formally requested that the city government investigate the issue.

The city’s Atomic Bomb Survivors Relief Department concluded there was a possibility that the name was written with incorrect Chinese characters in the confusion after the atomic bombing, since there was no Kajiyama name spelled that way (鍛冶山) in the registry containing names of families based on addresses from those days, and no other party had inquired about the remains. The procedures for the remains’ return were nearly concluded by March of last year, but the coronavirus pandemic forced a delay.

Taketo lived with Haru until he and his family moved to the former Manchuria (now northeastern China) in the spring of 1945. Haru is believed to have been killed in the atomic bombing in the Hiroshima area of Fujimi-cho (now part of Naka Ward) when she was 61. Shuji said, “Although the name’s Chinese characters were incorrect, I’m grateful that someone recorded the name Haru Kajiyama in some fashion, and that the reporter was able to connect that information back to me.”

The Atomic Bomb Memorial Mound contains the unclaimed remains of around 70,000 victims, with the names of 814 of that total identified by this time. The city government makes a list of unclaimed remains every year. Since last year, relatives have been identified for Haru and two other victims whose remains were handed over to the city by the Institute of Physical and Chemical Research, which is based in Wako City, Saitama Prefecture.