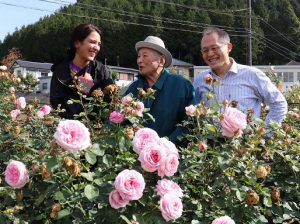 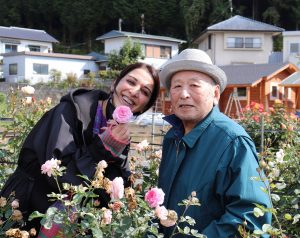 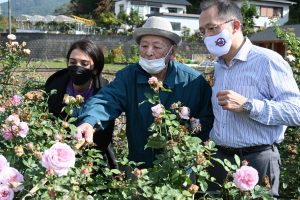 On November 2, the actor Sahel Rosa, 36, a resident of Tokyo, visited the Hiroshima Rose Garden, located in the Tomota area of Hatsukaichi City, Hiroshima Prefecture, where she met Kazuzo Tagashira, 92, an A-bomb survivor and rose breeder. Mr. Tagashira developed the garden’s “ICAN” roses, a variety named on the basis of Mr. Tagashira’s desire for the elimination of nuclear weapons and one that Ms. Rosa now cultivates. At last fulfilling their wish to meet in person for the first time, the two spent time sharing their views on peace.

Mr. Tagashira welcomed Ms. Rosa with a smile, guiding her through his greenhouse. When Ms. Rosa asked him why he had begun to cultivate roses, he explained, “In the year after I lost my younger brother in the atomic bombing, my neighbor gave me a rose seedling. I was taken by the beauty of the rose, which had bloomed amid the ruins of Hiroshima.” He emphasized his sense that, “Our love for flowers can help eliminate conflict.”

They strolled through a rose field in which pink ICAN roses bloomed vividly. Ms. Rosa explained to Mr. Tagashira her feeling that the soothing feelings generated when people view the flowers can lead to a peaceful world. She added she would convey Mr. Tagashira’s message to others.

Ms. Rosa is originally from Iran and came to Japan with her stepmother, Flora Jasmine, when she was eight. She now cultivates 140 varieties of roses in her own garden. In spring last year, she received a flowerpot of ICAN roses, a variety that Mr. Tagashira named in elation after the International Campaign to Abolish Nuclear Weapons (ICAN) was awarded the Nobel Peace Prize. The gift was delivered at that time to Ms. Rosa through the auspices of Akira Kawasaki, 52, a member of ICAN’s international steering committee.

Ms. Rosa dropped in at the Hiroshima Rose Garden, accompanied by Mr. Kawasaki, on the occasion of her visit to Hiroshima for a lecture series organized by the Hiroshima City government and other organizations in celebration of this month as Peace and Culture Month.