Sunao Tsuboi, devoting his life to passing on A-bomb experience as he tirelessly led A-bombed Hiroshima, is mourned by city following death 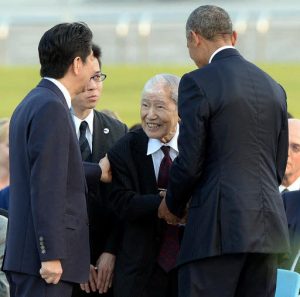 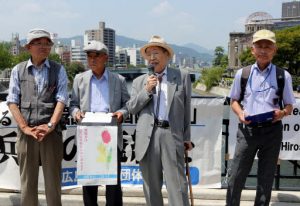 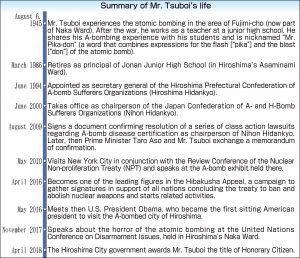 On October 27, at the news of the death of Sunao Tsuboi, A-bomb survivors engaged in various movements and others associated with him openly expressed their sorrow. As chair of the Hiroshima Prefectural Confederation of A-bomb Sufferers Organizations (Hiroshima Hidankyo), Mr. Tsuboi persisted in calling for the elimination of nuclear weapons and leading campaigns in support of A-bomb survivors, based on his own experience in the atomic bombing.

Toshiyuki Mimaki, 79, vice chair of Hiroshima Hidankyo said, “Mr. Tsuboi had a real presence, just by being there. I feel now as if a giant tree has fallen.” Mr. Mimaki was in close contact with Mr. Tsuboi for about 15 years. In recent years, however, due to his advanced age, Mr. Tsuboi was unable to make appearances at public events. For that reason, Mr. Mimaki took charge of work outside the organization on behalf of Mr. Tsuboi.

With the motto “Never give up,” Mr. Tsuboi continued his call for peace and the elimination of nuclear weapons. “He was tenacious in a mild-mannered way,” recalled Mr. Mimaki. He also expressed dissatisfaction, according to Mr. Mimaki, with “the Japanese government’s lack of concrete action” toward attainment of nuclear abolition.

Japan’s national government has turned its back on the Treaty on the Prohibition of Nuclear Weapons (TPNW), which entered into force in January this year amid increasing support for A-bomb survivors’ demands. “It is our duty to call on the Japanese government to ratify the TPNW during our lifetimes. I will persistently make appeals to the government for its ratification of the treaty, taking into consideration what Mr. Tsuboi would have done,” said Mr. Mimaki, as he vowed to pass on Mr. Tsuboi’s wishes.

What left an impression on Kunihiko Sakuma, 77, chair of the other Hiroshima Hidankyo, is that seven A-bomb survivors groups, including the two Hidankyo groups, all launched the drive to collect signatures for the Hibakusha Appeal. “When we were able to agree to do it together, I believe we understood our common goal of eliminating nuclear weapons from this earth, despite the history of the split between the two groups,” he recalled.

Mr. Tsuboi, as chairperson of the Japan Confederation of A- and H-Bomb Sufferers Organizations (Nihon Hidankyo), continued working on activities both in Japan and overseas with the aim of conveying the reality of the atomic bombings. Michiko Kodama, 83, co-chair and assistant secretary general of Nihon Hidankyo, traveled to New York with Mr. Tsuboi to attend the Review Conference of the Nuclear Non-proliferation Treaty (NPT) in 2010. “I want you young people to communicate the true consequences of the atomic bombing to future generations,” he said to her, words that encouraged her to share with the public her A-bomb experience. Ms. Kodama explained with conviction, “He was a strong leader. I intend to pass on his wishes by conveying to young people the horror of nuclear weapons.”

As a former teacher, Mr. Tsuboi considered dialogue with young people to be important. Koichiro Maeda, 72, secretary general of Hiroshima Hidankyo and former director of the Hiroshima Peace Memorial Museum, frequently witnessed Mr. Tsuboi welcoming young people from overseas and others who visited the offices in Hiroshima’s Naka Ward without an appointment and sharing with them his A-bombing experience. “He devoted his life to speaking of his experience, because he believed atomic weapons must never be used again and did not want anyone else to suffer what he had experienced,” said Mr. Maeda.

Airi Sakuhara, 22, a senior at Hiroshima University who lives in Higashihiroshima City, is one of those who have taken to heart conversations with Mr. Tsuboi. When a student at Eishin Junior/Senior High School, located in Fukuyama City, she compiled a booklet about Mr. Tsuboi’s life as part of her school club’s activities. “I will always remember how he conveyed his painful experience with tears running down his face,” she said. She was able to feel acutely the cruelty of the atomic bombing through his facial expressions, which differed from the brave face he put on as he worked for campaigns involving A-bomb survivors. She said, “I want to communicate the A-bomb survivors’ wish that no one else should suffer what they experienced.”