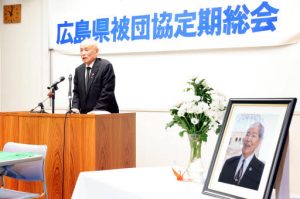 On November 1, the Hiroshima Prefectural Confederation of A-bomb Sufferers Organizations (Hiroshima Hidankyo) held its annual general assembly in Hiroshima’s Naka Ward, as it mourned the loss of Sunao Tsuboi, who died on October 24 at the age of 96. Mr. Tsuboi had been the organization’s chairperson, as well as the so-called “Face of Hiroshima” who continued his efforts to convey the reality of the atomic bombing to others. Toshiyuki Mimaki, 79, a resident of the town of Kitahiroshima-cho in Hiroshima Prefecture and acting chair of Hiroshima Hidankyo, was appointed to serve as Mr. Tsuboi’s successor. Mr. Mimaki pledged to persist in efforts to abolish nuclear weapons and demand support for A-bomb survivors.

In typical years, the organization holds its general assembly in May or June, but the meeting had been postponed due to the coronavirus pandemic. Approximately 40 A-bomb survivors representing different regional organizations in the prefecture attended the recent meeting. All participants took part in a moment of silence in memory of Mr. Tsuboi, whose photograph was positioned in the venue.

An executive committee member made a proposal for the appointment of Mr. Mimaki as the next chair of the organization, effective November 1, and the attendees applauded as a sign of their approval of the proposal. The committee also nominated Mr. Mimaki for the position as co-chairperson of the Japan Confederation of A- and H-Bomb Sufferers Organizations (Nihon Hidankyo), another post held by Mr. Tsuboi until his death. Nihon Hidankyo is co-chaired by three members, one each from Hiroshima, Nagasaki, and Japan’s Kanto region, which includes the capital city of Tokyo.

Mr. Mimaki was three years old when he was exposed to radiation from the atomic bombing. Led by his mother, they entered Hiroshima to look for his father who, at that time, worked at the Hiroshima Station. In recent years, Mr. Tsuboi had been unable to attend public events due to his advanced age and health issues. During Mr. Tsuboi’s absence, Mr. Mimaki took the lead in several activities, including campaigns to gather signatures on the streets of the city. He had served as the acting chair of Hiroshima Hidankyo since 2019. “The new posts carry heavy and great responsibility. I will continue to demand relief for the A-bomb survivors and the abolition of nuclear weapons in my own way, taking into consideration what Mr. Tsuboi would have done,” Mr. Mimaki said emphatically.

Among other survivors who gathered to remember Mr. Tsuboi were Masanori Ueda, 89, vice chair of the organization who lives in Kure City, and Masao Hoyama, 92, chair of the A-bomb Sufferers Organizations in Mihara City. Mr. Ueda said, “In that moment of silence, I recalled how we had traveled together around the Chugoku region to listen to other survivors’ concerns and issues. Even should I collapse and fall down, I have to continue fighting.” Looking forward, Mr. Hoyama said, “We will continue conveying the reality of the atomic bombing and the wishes of Mr. Tsuboi, while trying to find a way to develop our activities together with second-generation A-bomb survivors.”