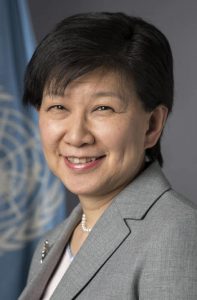 The Treaty on the Prohibition of Nuclear Weapons (TPNW), which comprehensively prohibits the development and possession of nuclear weapons, entered into force one year ago on January 22. Fifty-nine countries and regions have thus far ratified the treaty, and the First Meeting of States Parties to the TPNW is scheduled to take place in March in Vienna, Austria. In contrast, nuclear weapon states, as well as Japan and other countries that depend on the “nuclear umbrella” provided by the United States, have turned their backs on the treaty. What impact will the treaty have on the international community’s move toward a world free of nuclear weapons? How should Japan’s national government and the A-bombed city of Hiroshima respond to the treaty? In this series, the Chugoku Shimbun interviews two leading figures in this area.


Japan needs to have political discussions
Explore how TPNW and NPT can complement each other
The number of countries that have signed and ratified the treaty has gradually increased. How do you interpret the present situation?
The treaty has been ratified at a pace that equals that of other disarmament treaties, which is very encouraging. It might be a sign that many countries were dissatisfied with the lack of progress in nuclear disarmament. Nuclear weapon states are not likely to ratify the treaty in the near future, but it appears as if they have come to realize they should refrain from unnecessary criticism and accept the fact that the treaty has already entered into force.

The Japanese government has adopted a negative attitude toward participating in the meeting of states parties as an observer.
Japan needs to have sufficient discussions within the country about how to advance nuclear disarmament and how to engage with the treaty. In doing so, the most important element is trying to understand how nuclear weapons should be eliminated, not whether or not Japan should join the treaty. The treaty was drawn up as the world was already working to move forward toward the goal of eliminating nuclear weapons.

The view of the treaty held by Japan’s national government has gradually changed. Prime Minister Fumio Kishida has described the agreement as “an important treaty that can serve as a kind of off-ramp leading to a world free of nuclear weapons.” Other prime ministers in recent years would not have made such a remark. I hope Japan’s national government will view the treaty in terms of how it can be used to complement the Nuclear Non-Proliferation Treaty (NPT), of which nuclear weapon states are also members, and how it can help to make progress toward elimination of nuclear weapons instead of viewing the treaty from a critical point of view.

The government indicates it will serve as a bridge between nuclear and non-nuclear weapon states. What does the government need to do in this regard?
It can demonstrate its role as a bridge like this in a tangible way. If the NPT Review Conference’s final document refers to the TPNW, a variety of opinions will likely be exchanged during the negotiations between nuclear weapon states and nations that ratified the treaty. Japan can make proposals that are acceptable to both sides, for example. Japan also needs to help alleviate the persistent tension that exists among nuclear weapon states.

Norway and Germany, members of the North Atlantic Treaty Organization (NATO) for which the U.S. “nuclear umbrella” plays a central role, announced they would participate in the meeting as observers.
An increasing number of countries are intending to participate as observers, and I have heard that other NATO member states are also considering participating. It is important for all of the countries to illustrate, by participating in the meeting as observers, that they share the goal of elimination of nuclear weapons. Also, the meeting can serve as a venue from which is delivered a message concerning applications of the treaty. I hope that the observer nations can convey information on how the treaty can complement the NPT and what roles the treaty should play.

What role can the A-bombed city of Hiroshima play toward the comprehensive prohibition of nuclear weapons promoted by the treaty?
Information from Hiroshima about the humanitarian consequences of the use of nuclear weapons is extremely important, as is the presence of the A-bomb survivors on the world stage. As an example, during training organized by the UN, many diplomats have decided to work on nuclear issues as their life’s work after visiting Hiroshima and Nagasaki and listening to A-bomb survivors’ testimonies about their experiences in the bombings. In fact, Rafael Mariano Grossi, Director General of the International Atomic Energy Agency, is apparently one such diplomat.

Nevertheless, A-bomb survivors are growing elderly, making it necessary to consider how the reality of the atomic bombings can be passed on to future generations. Many groups of young people based in Hiroshima are engaged in creative efforts in this regard, including development of a smartphone application that allows people from anywhere in the world to visit Hiroshima remotely. I hope such young people can continue to communicate their message from Hiroshima.

Izumi Nakamitsu
Born in Tokyo in 1963. Graduated from Waseda University. Holds a master’s degree from Georgetown University in the United States. Joined the United Nations in 1989. Assumed her current position in May 2017 after serving in such posts as Director of the Asia and the Middle East Division of the UN Department of Peacekeeping Operations, Assistant Administrator of the Crisis Response Unit at the UN Development Programme, and UN Assistant Secretary-General. Ms. Nakamitsu is 58.