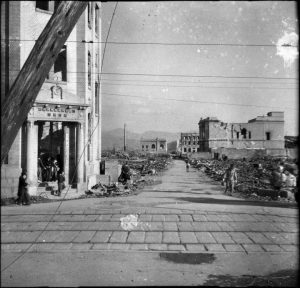 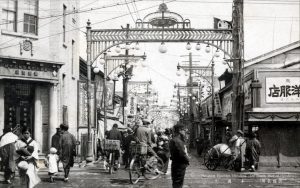 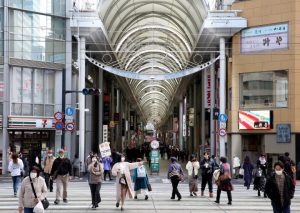 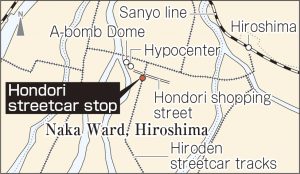 A photograph taken around November 1945 shows that most stores lining both sides of Hiroshima’s Hondori shopping street (now part of Naka Ward), one of the busiest shopping areas in the city, had been reduced to rubble after the atomic bombing by the U.S. military. Banks and other reinforced concrete buildings had escaped destruction, but their walls and windows were damaged. The street was nearly empty.

The photo was taken by Yoshito Matsushige, former staff photographer at the Chugoku Shimbun who died in 2005 at the age of 92. Mr. Matsushige, known for his photos taken on the day of the bombing showing the suffering of the people of Hiroshima, continued to take photos of the city even after the bombing. The photo of the devastated Hondori shopping street was taken facing east from around the present-day Hondori streetcar stop (then known as the Kawaya-cho streetcar stop).

The Hiroshima Municipal Archives has on hand a photo of the same location taken around 1935. Along the street crowded with people are signs outside of a bookstore and a tailor shop. As the war intensified, some of those shops had to close their doors. But it is believed that around 160 retailers were doing business in August 1945. Most were obliterated without a trace, along with many people shopping on the street on August 6.

The Okumoto Hardware Store was on a corner of the shopping street near the Hiroshima Branch of the Imperial Bank (now the Hiroshima Andersen bakery). The six people who lived there, including the owner Yaezo Okumoto, then 43, died in the atomic bombing. When Yaezo’s son Hiroshi, now 91, returned home the following day after working as a mobilized student dismantling buildings to create fire lanes, he found embers remaining under the ruins of the store. He said that when he walked near the Kamiyacho streetcar stop, “There were so many charred and bloated bodies I had to be careful not to step on them.”

Hiroshi temporarily lived with relatives in a different prefecture in Japan after the war but returned to Hiroshima to open a menswear shop on the Hondori shopping street. He closed the store in 2001 but still resides on the same street. He has four grandchildren and four great-grandchildren. The street has been restored and now has around 200 retailers doing business there. Looking at the photo of the ruined street taken 77 years ago, he said calmly, “I truly appreciate the peace and quiet now.”

Hiroshima’s central area was flattened in the atomic bombing 77 years ago. The renewed website “Striving to fill voids in Hiroshima” will post the photographic record taken at the time of the disaster along with photos taken at the same locations before the atomic bombing and at the present time to shed light on not only what was lost that day but also how Hiroshima transformed as it went through its period of reconstruction.