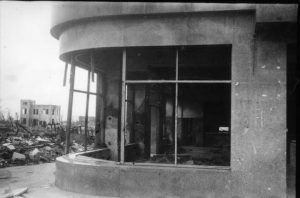 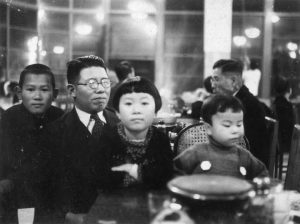 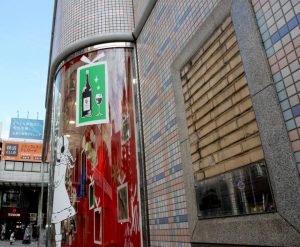 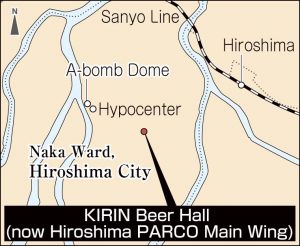 The huge, modern windows had been blown out of their bent window frames. The KIRIN Beer Hall was located on a corner in the downtown area where the present-day Hiroshima PARCO Main Wing is located (in the city’s Naka Ward). The interior of the three-story reinforced concrete building was incinerated in the fires following the atomic bombing, except for the basement. The photograph of the site was taken on August 20, 1945, two weeks after the bombing, by Masami Oki, who died at the age of 93 in 2007.

Mr. Oki, then 31, worked for the Kure Naval Arsenal, located in Kure City, during the war. The day after the U.S. military dropped the atomic bomb on Hiroshima, he entered the city center as a member of a rescue party.

“The circumstances were too cruel for me”

Corpses were situated in piles on top of one another in a burned-out streetcar and children had fallen where they had been alongside a river. Mr. Oki wrote about the devastation he saw at the time in notes that are included in the Record of the Hiroshima A-bomb War Disaster (published in 1971). He wrote that, in front of the beer hall, about 700 meters from the hypocenter, “There was a dead horse whose torso had become so bloated it appeared to be on the verge of bursting.”

According to Mr. Oki’s eldest son, Takehiko, 74, who lives in the area of Kaita-cho in Hiroshima Prefecture, “My father would say, ‘The circumstances were too cruel for me to take photos of people.’” The photos of the atomic bombing Mr. Oki took have been confirmed to include one showing the atomic mushroom cloud seen from Kure City on the day of the bombing and 21 photos revealing the city’s devastation in the days after the bombing.

One photo of the beer hall from that time shows the hall as it was when it served as a place of enjoyment for the public, before the war and the atomic bombing ruined it. One photo from the photo album of the late Rokuro Suzuki, who ran a barbershop nearby, shows his family and relatives eating together in 1938, when the beer hall first opened its doors.

No remains were found

In the center of the photo is Kazuko Shintaku, Rokuro’s niece. Seven years later, on the day of August 6, Ms. Shintaku was mobilized to help tear down buildings to create fire lanes as a first-year student at Hiroshima Prefectural First Girls’ High School (now Minami High School). Her remains were never found after the atomic bombing. Mr. Suzuki and his family of six, including his wife and children, all died in the bombing. The beer hall, which had avoided collapse in the atomic bombing, resumed operations after the war, but the photo reveals a family gathering that could never be replicated.