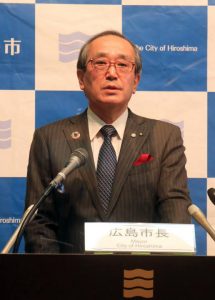 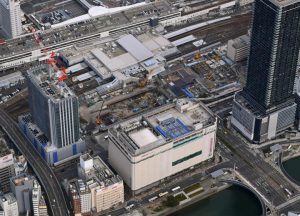 On January 31, the Hiroshima City government announced its initial budget proposal for fiscal 2022. As in recent years, the proposal places a priority on tangible projects for revitalizing the city center, including construction of a soccer stadium and redevelopment of the area in front of the JR Hiroshima Station. The city will also work on promoting a culture of peace, passing on the experiences of A-bomb survivors, education issues, and improving the environment for child rearing. Another focus of the proposal is revitalization of communities that face aging populations and worker shortages.

Creation of peace On 40th anniversary, Mayors for Peace to hold general assembly in August The central pillar of the budget proposal is the promotion of a culture of peace, as outlined last year by Mayors for Peace, for which Hiroshima Mayor Kazumi Matsui serves as president, in the organization’s ‘new vision.’

Starting this fiscal year, the city designated November as Peace Culture Month, with concerts and lectures based on the peace-culture theme scheduled to be held. The city has called on 24 other municipalities within the city’s greater metropolitan area to involve themselves in promoting a culture of peace, offering to work together to create scheduling of joint events and marketing to promote the activities.

The city government will look to create 5,000 copies of a booklet describing the philosophy behind the peace-culture idea. The publications will be distributed to the public and member cities of the Mayors for Peace organization. The city will also hold workshops to explore how to expand the circle of peace activities. In August, the city is to host the Mayors for Peace general assembly, which has already been postponed twice due to the coronavirus pandemic, as well as an event designed to commemorate the 40th anniversary of the group’s founding.

To continue passing on the memories of the atomic bombing, the city government will begin training Family A-bomb Legacy Successors, envisioned as children and grandchildren of A-bomb survivors who can communicate family members’ accounts of the atomic bombing. The city is scheduled to begin inviting applicants interested in the new position in May. After a two-year training period, the successors will begin communicating the A-bombing accounts of their parents or grandparents at the Hiroshima Peace Memorial Museum, located in the city’s Naka Ward, and other venues.

The city will also continue its plea to the international community for the elimination of nuclear weapons. Expenses allowing Mr. Matsui to participate in the Nuclear Non-Proliferation Treaty (NPT) Review Conference, repeatedly postponed because of the pandemic but scheduled to be held in Europe this spring, have been included in the budget proposal. Mayor Matsui will also participate in the meeting of the European chapter of Mayors for Peace, scheduled to be held in Granollers, Spain.