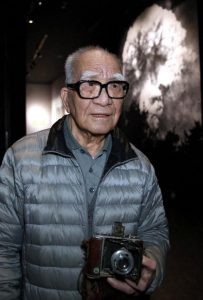 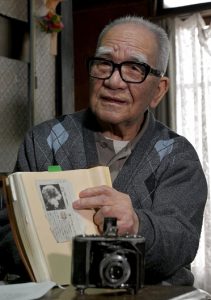 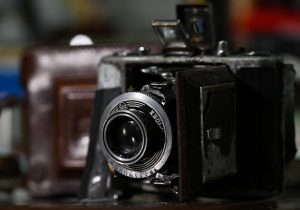 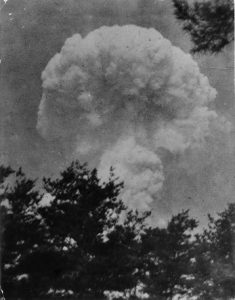 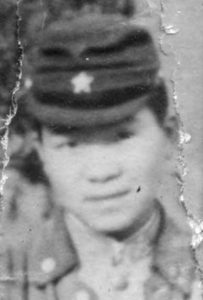 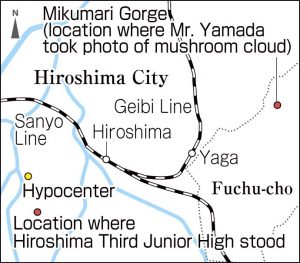 A black-and-white photograph of the A-bomb mushroom cloud rising from behind a thick growth of trees is on display at the Hiroshima Peace Memorial Museum. The photo was taken by Seiso Yamada, 93, who was 17 at the time. Mr. Yamada remembers “the intense blood-red cloud that rose like a giant sun.”

He was a third-year student of the night-school system at First Hiroshima Prefectural Junior High School (now Hiroshima Kokutaiji High School), which was also known as Hiroshima Third Junior High. During the day, he worked part-time for the Chugoku Shimbun, located in the area of Kaminagarekawa-cho (now part of Hiroshima’s Naka Ward). His job involved going around to press clubs in Hiroshima City Hall and the Hiroshima Prefectural government offices to collect manuscripts and bring them back to the paper’s headquarters. After finishing his work, he would attend classes at the school, starting at around 5:00 in the evening.

August 6, 1945, was a Monday. He had taken the day off from his job to travel to Mikumari Gorge, in the vicinity of his home, with his childhood friend. They had planned to cook rice in a camping pot and eat it together. As they were about to reach the entrance to the gorge area, he saw a sudden flash of light, as if right in front of his eyes, and then heard a huge bang.

Trees in the pine forest around them shook violently from the blast and a huge cloud arose rapidly. “What’s that? It’s beautiful,” he said. Immediately, he pointed the lens of the domestically produced, bellows-type camera he had taken with them toward the cloud and snapped several photos.

Right around 2:00 in the afternoon, as the friends were still in the gorge eating their food, his friend’s mother came to pick them up and remarked that something terrible had happened. When they returned in the direction of the Fuchu National School (now Fuchu Elementary School), located at the foot of the gorge, he witnessed people with severe burns over their entire bodies and skin hanging down from their hands as they poured into the area.

He went to the Yaga train station and determined to walk to the center of Hiroshima. However, he was unable to make it around the part of the city called Kojin-machi (now part of Minami Ward), near Hiroshima Station, because the heat was blocking his way forward. Already, fires caused by the bomb’s thermal rays had spread through the city.

Several days later, he went to his school in the area of Zakoba-cho (now part of Naka Ward), where he found that the school building had collapsed and children’s corpses were scattered about. “It was akin to burning people alive. What a terrible thing they did,” he said as anger welled up.

The Chugoku Shimbun headquarters building, located about 900 meters from the hypocenter, also burned down, resulting in the deaths of 114 employees. Due to aftereffects from the atomic bombing, he recalled, “Many people who didn’t appear to be wounded died later.”

Nevertheless, with the news media in chaos after the end of the war and censorship applied by the General Headquarters of the Allied Forces (GHQ), the photo became known for the first time only on July 6, 1946, in that day’s edition of the Yukan Hiroshima, a local evening newspaper. Mr. Yamada’s photo was developed by Yoshito Matsushige (who died in 2005 at age 92), a Chugoku Shimbun photojournalist that had taken photos of the center of Hiroshima in the immediate aftermath of the atomic bombing. The mushroom cloud photo was introduced with the captions, “Documentary photo of the century” and “Shortly after detonation, the moment the atomic bomb opened up into the shape of a mushroom.”

In the spring of 1946, Mr. Yamada graduated from the junior high school. Afterward, he began to work on staff at the Chugoku Shimbun and build his career as a reporter. In October 1975, he reported on the game in which the local professional baseball team the Hiroshima Carp won its first championship. The game was played at the Korakuen baseball stadium, in Tokyo, which was packed with 50,000 fans. He said of that time, “The small Hiroshima Carp baseball team, born in the burnt ruins of the city and facing bankruptcy numerous times, claimed victory. Carp fans also did their part.” The passion at the stadium at that time is still fresh in his mind.

Last month, in January, Mr. Yamada visited the museum for the first time. Looking up at his enlarged “Documentary photo of the century,” he said, “Most of the people who were under the mushroom cloud have died. I would like people in 100 years’ time to see this photo and know it was the atomic bomb dropped on Hiroshima.”