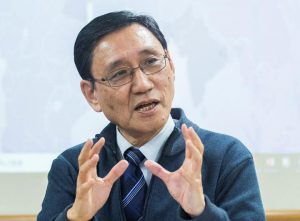 
Japan should make diplomatic efforts toward ratification of TPNW
Stigmatized five nuclear superpowers under heavy pressure to join treaty
Since it entered into effect, how has the Treaty on the Prohibition of Nuclear Weapons (TPNW) affected the international community?
An effect that the treaty has had as its objective is the attachment of a stigma to nuclear weapons. For example, there are moves afoot to halt investments in, and funding of, companies associated with nuclear weapons, and another effort by the New York City Council and other such local bodies in the United States to demand that the federal government participate in the TPNW. Early this year, leaders of the five nuclear superpowers—the United States, China, Russia, the United Kingdom, and France—released a joint statement declaring that avoiding nuclear war was their “ultimate obligation.” In this way, I assume the treaty has also placed pressure on the five nuclear nations.

Japan’s government has shown resistance to participation as an observer in the meeting of States Parties to the TPNW, scheduled for March. If Japan were to participate in the meeting, do you think it would be an advantage or disadvantage for the country?
The government would gain more than it loses. Japan’s participation in the meeting as an observer would be seen as an action toward bridging the gap between nuclear weapon and non-nuclear weapon states, a role the government has declared it wants to assume. Because the nation has suffered atomic bombings, Japan has knowledge about support for nuclear victims and environmental reclamation, issues that are incorporated into the treaty. Japan can provide cooperation in such areas.

To participate in the meeting it would be desirable for the government to have sufficient discussions with the United States, as well as with U.S. allies such as Australia and South Korea, to avoid a situation in which Japan’s participation is considered an act equivalent to the denial of U.S. nuclear deterrence. Japan’s participation might put its government at a disadvantage because the United States would be opposed, but I don’t think it would seriously affect the U.S.-Japan alliance. If it were to be made clear that Japan’s action wouldn’t affect the existing alliance, the country’s participation would be assured.

Do you think it’s feasible for Japan to sign and ratify the TPNW?
For Japan to join the treaty, which denies the concept of nuclear deterrence, it would be necessary to create a situation in which nuclear deterrence is no longer required, while at the same time the U.S.-Japan alliance is maintained. Enormous amounts of effort and time would be needed to realize the goal of joining the treaty, but I don’t think it’s impossible. The key would be how much effort the government makes toward that end.

What sorts of efforts do you think are required?
At first, it would be necessary for Japan’s national government to ease the tension seen in our region, including on the Korean Peninsula and in China and Russia, through diplomatic efforts. For example, such efforts might also include normalization of diplomatic ties with North Korea or provision of support to help end the war between North and South Korea. The capability to strike enemy bases, an option Japan’s government is now considering, would exacerbate tensions. If tensions were to heighten in the region, the risk of war or use of nuclear weapons could increase, completely negating the significance of the treaty.

A crucial step would be the creation of a “nuclear weapon-free zone” in Northeast Asia and the Korean Peninsula through a commitment that no nuclear attack would be conducted within that zone. If the United States were to join this commitment, North Korea would be able to discard its nuclear arsenal with confidence, and with that the risk of Japan’s being attacked by nuclear weapons would be lessened. If nothing were to be done while using the severe security environment as an excuse, Japan’s participation in the TPNW would never be achieved.

Tatsujiro Suzuki
Born in Osaka in 1951. Graduated with a master’s degree from the Massachusetts Institute of Technology in the United States and obtained a doctoral degree in engineering from the University of Tokyo. Served as vice chairman of the Atomic Energy Commission of Japan in the Cabinet Office and as director of the Research Center for Nuclear Weapons Abolition at Nagasaki University (RECNA) and serves as a member of the Pugwash Conferences, a worldwide organization composed of scientists seeking to eliminate nuclear weapons. His fields of expertise include nuclear disarmament and proliferation policies. Mr. Suzuki is 70.