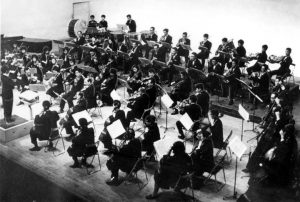 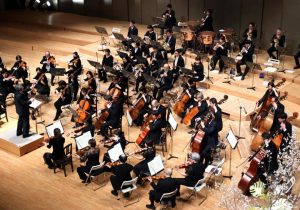 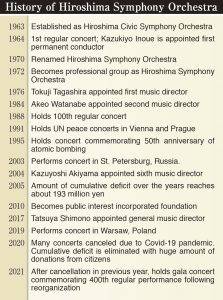 This year marks the Hiroshima Symphony Orchestra (HSO)’s 50th anniversary. Tomin Harada (1912–1999), a physician and peace activist who served as the 2nd chairman of HSO at the time it became a professional orchestra, once described the symphony group as “a miracle flower that bloomed in the dry, A-bombed desert.” How was the first professional orchestra in the Chugoku and Shikoku region of Japan born and how did it grow into a national-level symphony orchestra? Amid the current crisis facing the arts in the face of the coronavirus pandemic, the Chugoku Shimbun once again sets out to trace the history of HSO, an orchestra once referred to as a miracle.

On April 6, 1964, the Hiroshima Civic Symphony Orchestra, the predecessor organization to HSO, was finally able to hold its first regular concert. While the performers on stage at the Hiroshima City Conference Center appeared nervous, they also wore expressions of great pride. Some donned school uniforms with stiff collars. Kazukiyo Inoue (1933–2019), then an associate professor at the Elisabeth University of Music, stood at the conductor’s podium with a stern countenance. The orchestra performed Beethoven’s “Egmont” as its inaugural piece, depicting the Count of Egmont, a hero who loved peace and fought for the people.

Under the slogan “Orchestra of the people, by the people, and for the people,” the civic orchestra was formed by local musicians who also encouraged amateur players to join in. After six months of practice, the orchestra held its first regular concert, resulting in 1,500 citizens flocking to the Hiroshima City Conference Center. The admission fee was 200 yen. The Chugoku Shimbun’s evening edition reported on the concert under the headline, “The orchestra’s first concert was huge success.”

Who played the instruments in the orchestra at that time? The list of performers for the second concert, in November 1964, remains today.

The major performers were nine members of the NHK Hiroshima Radio Orchestra, 13 teachers and students from the Elisabeth University of Music, and 11 teachers at junior and senior high schools. Amateur musicians who worked for different companies, such as Mitsubishi Heavy Industries, Mazda, Chugoku Electric Power, Japanese National Railways, Hiroshima Television Corporation, and Radio Chugoku Company, also performed in the orchestra. The group included a police officer, a Japan Self Defense Force member, a physician, a priest, a university student, and a high school student. The orchestra had 85 members in total, making up a patchwork group of instrumentalists.

“It was just a year since I started taking viola lessons. I managed to pretend I was playing the parts I actually couldn’t,” said Otohiko Irie, 77, a resident of Hiroshima’s Asakita Ward who was then a second-year student at the Faculty of Engineering at Hiroshima University. “I desperately tried my best to not slow down the entire orchestra,” he added. Mr. Irie joined the symphony orchestra at the time of its second concert, based on an invitation from Takashi Tanaka, a member of the NHK Hiroshima Radio Orchestra who later became principal violist of HSO and died at age 76 in 2007, under whom Mr. Irie had been studying the viola.

The symphony group rented a studio at the NHK Hiroshima broadcast station for practices. The members gathered together after work or school, and practiced until late at night. Mr. Irie recalled, “It was tough, but the pleasure of being able to play with so many people outweighed the hard practice.”

Back then, the Chugoku Shimbun covered how hard the members were working. “The orchestra was formed to be food for the mind of citizens in Hiroshima, because the members wanted to create an orchestra to serve as a cultural symbol rather than having the atomic bombing as Hiroshima’s only symbol,” wrote the newspaper. “However, the symphony does not receive payment for performances and they have to pay their own travel expenses. It is truly an orchestra of volunteers,” it added.

Since then, 50 years have passed. This year on February 6, HSO held the “Bouquet of Music” symphony concert at the International Conference Hall Hiroshima, which is located where the Hiroshima City Conference Center once stood. Sibelius’s orchestral masterpiece was performed gorgeously.

HSO now has 61 members. In the past decade, numerous experienced performers from Hiroshima have left the orchestra after reaching mandatory retirement age, significantly bringing down the average age of members. Most of the younger members have been selected through a process of auditions, in which nearly 100 applicants compete for a single post. Most are from top-notch universities of the arts and music, and some have moved from orchestras in Tokyo or Osaka. The birthplaces of the performers are scattered across Japan.

Mr. Irie supports HSO now as a music aficionado. He said, “If we had never had the era of the Hiroshima Civic Symphony Orchestra, the current HSO probably wouldn’t exist today.” He is proud of history of the orchestra born in Hiroshima.