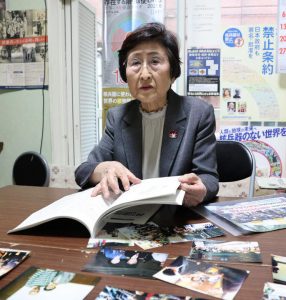 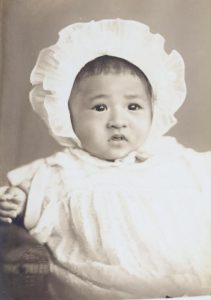 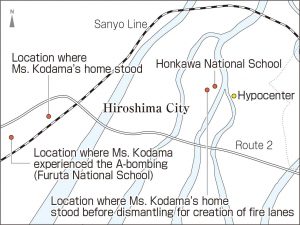 
Anguished about her younger daughter’s cancer, “The atomic bombing is not a tale from long ago”
Michiko Kodama, 84, was seven years old when she experienced the atomic bombing and her cousins’ deaths. “It is not a tale from long ago. You could find yourselves being victims in the same way.” Ms. Kodama has been communicating to younger generations her experience of suffering as an A-bomb survivor over the span of 77 years while working as assistant secretary general of the Japan Confederation of A- and H-Bomb Sufferers Organizations (Nihon Hidankyo), a nationwide organization representing A-bomb survivors. We talked with Ms. Kodama about her story by connecting Hiroshima to her location in Chiba over the internet.

In 1945, Ms. Kodama was in the second grade at Honkawa National School (now Honkawa Elementary School in Hiroshima’s Naka Ward) and lived near the school. However, because their house was slated to be dismantled for the expansion of fire lanes in the event of air raids, the family was forced to move around July to the area of Takasu (now part of the city’s Nishi Ward).

On the morning of August 6, she was at her desk by the window in the classroom of Furuta National School (now Furuta Elementary School), her new school about four kilometers from the hypocenter, when she suddenly experienced a flash of light. She quickly ducked under her desk, but the left side of her body, from her shoulder to her back, was hit with shards of glass. Her teacher ripped up a curtain and used it to dress her wounds.

She returned home from school that day carried on her father’s back. On the way, they passed by people who were fleeing from the city’s downtown area. Among them were a woman crawling on the ground while holding a charred baby and someone who clung to her father’s leg begging for water. “A girl, whose body and one side of her face were badly burned, cried out for help with her eyes.” When Ms. Kodama looked back, the girl had already collapsed to the ground.

The roof of their house, located about 3.5 kilometers from the hypocenter, had been damaged by the bomb’s blast, and inside there were black streaks on the walls and a chest of drawers. Those were the remnants of the “black rain,” which contained radioactive particles, that had fallen in the aftermath of the atomic bombing. Still, relatives who had to leave their own burned homes came to stay at her house.

Ms. Kodama to this day remembers her cousin, a girl aged 14, who died in the atomic bombing after helping in work to demolish building for the creation of fire lanes in the city. When she heard a sound at the front door and went to check, someone who appeared nearly naked with burns all over her body was standing there. She failed to recognize her cousin until the person called her by her nickname “Micchan.”

Ms. Kodama desperately worked to provide care for her favorite cousin, wiping away pus oozing from her body and removing maggots from her wounds. On the third day, her cousin called out for water. Ms. Kodama held her in her arms and squeezed a moistened hand towel into her mouth, but her cousin was unable to drink the water, which ended up trickling down around her mouth. She passed away then in her arms.

Another of her cousins, a boy aged 10, appeared only slightly injured at the time, but he suffered from persistent diarrhea and sometimes bled from his nose and mouth. One day, early in September, he suddenly vomited a clump of blood, collapsed, and died on the spot. Because she was also suffering similar symptoms, Ms. Kodama said, “I was so scared, I couldn’t leave my mother’s side for some time.”

The entire Honkawa district, located right next to the hypocenter, was annihilated. Ms. Kodama wondered, “What would have happened had we not moved away from the area the previous month?” Thinking of her many friends who lost their lives in the bombing, Ms. Kodama said she suffered from survivor’s guilt.

After the war, she faced discrimination. Because she was an A-bomb survivor, her applications for different jobs were rejected, and the relatives of her boyfriend at the time did not let them marry. With that experience, she says she closed her heart. However, a turning point arrived when she met her future husband through a friend. After they married, his work took them to Chiba Prefecture. Amid feelings of unease and anxiety, she gave birth to, and raised, two daughters.

Her second daughter was an especially cheerful and active person. Later, however, at the age of 45, she was diagnosed with cancer and died in February 2011, four months after diagnosis. The death of her daughter brought anguish to Ms. Kodama because she wondered whether her atomic bombing experience was the cause.

About 40 years ago, she made up her mind to speak publicly about her atomic bombing experience, an activity she continues today, based on the idea that, “No one else should ever have to face the same experience.” Russia has threatened the use of nuclear weapons. “We must never let them use the weapons,” said Ms. Kodama. “Think about what you can do to prevent your loved ones from falling victim to a nuclear attack. Let’s move forward on this issue together.”